Madness in the Family 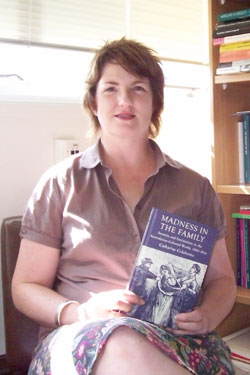 Incidents such as the recent alleged murder in Hamilton by a patient under psychiatric care inevitably prompt calls for people with major mental health issues to be locked up for good, but Waikato University historian Dr Catharine Coleborne says that’s not always the right or most practical solution.

Associate Professor Coleborne has just written a book called Madness in the Family – Insanity and Institutions in the Australasian Colonial World 1860-1914. She says her research has shown that from the time ‘insane asylums’ were built in New Zealand and Australia, patients have been released into the community for short or extended periods. “Even then it wasn’t practical to confine every patient forever, and naturally there were elements of risk associated with letting people go home.”

Coleborne received a Royal Society of New Zealand Marsden grant to research her book which involved reading hundreds of patient records at National Archives in Auckland, Queensland, Victoria and New South Wales. “I found patients came and went from their asylums with surprising frequency. It was not a case of locking troublesome family members away and throwing away the key. Quite the opposite, it was very much a revolving door. Some people had seven or eight hospital stays over a decade.”

Families were very much part of the process, and letters showed their concern for loved ones and discussed their progress. “It must have been hard for people to seek help for mental illness and medications were almost nonexistent. There were restraints, rest therapies, alcohol and other sedatives, and water treatments including shower and plunge baths.”

With their limited resources Coleborne says the doctors generally appeared compassionate and concerned. “There was a steady stream of mail coming and going, though much of the outgoing post was vetted and cleaned up if necessary by the superintendent.”

New Zealand and Australia built mental institutions early in their colonisation – based on British, Irish and American models. “And in those early years the patients were mostly men – they came to a new country, were often working in remote areas, in the bush, away from family and suffered breakdowns. They were vulnerable and often their behaviour would lead to police surveillance and subsequent arrest. By the early part of the 20th century more women were being committed.”

And Dr Coleborne says while the language and medical terms were different in the 1800s – records don’t talk about schizophrenia or bipolar disorder - there are frequent mentions of mania and depression.

Her new book is aimed at an academic audience of scholars researching the histories of mental illness and hospitalisation, but she says it has broader implications for our own contemporary understandings of the problem of mental breakdown, institutionalisation and the ways that families coped with these, and how they also deployed innovative strategies and came up with solutions for care. Institutions, far from being cruel places, helped to ease some family difficulties.

“It’s a very rich area of research,” says Dr Coleborne who is currently part of a research team with a colleague at the University of Otago investigating insanity and ethnicity in colonial Australia and New Zealand, also funded by the Marsden Fund.