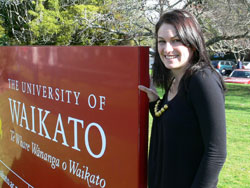 A Waikato Management School student has been selected to attend an international gathering of young leaders in the Malaysian state of Malacca at the end of July.

Ruth Pinkerton, who’s completing a Bachelor of Management Studies (Hons) in Economics, will join more than 300 students from around the world at the week-long University Scholars Leadership Symposium.

“I’m looking forward to the networking opportunities,” says Pinkerton, a straight A student who already has a job already lined up at the Treasury when she graduates.

“I grew up on a farm near Te Awamutu, so this is a chance to gain an insight into how the other half of the world lives, and I’m keen to learn more about humanitarian issues.”