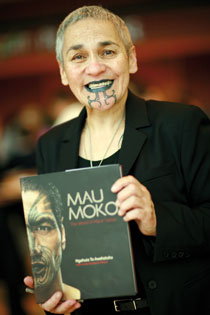 Popular read: Professor Ngahuia Te Awekotuku at the launch of her book Mau Moko: The World of Māori Tattoo.

Award winning book Mau Moko: The World of Māori Tattoo continues to be a popular read. Written by Professor Ngahuia Te Awekotuku and colleagues at Waikato University, Mau Moko won a Montana award in 2008 and was proclaimed Maori Book of the Decade from Massey University’s Ngā Kupu Ora Māori Book Awards. It has been reprinted twice with 6600 copies sold so far. Geoff Walker from Penguin Books says Mau Moko sells steadily month after month and while that keeps happening they’ll keep reprinting.

Mau Moko was also purchased and published by the University of Hawaii Press, who have the American rights, and the first edition sold out last year.

The French language rights to the book were sold to Editions Au Vent des Iles, based in Tahiti, and they’ve published their edition, but Geoff Walker says elsewhere it hasn’t been so easy to sell as some cultures view tattooing differently from us.

“Tattooing is often seen in foreign places as a fetishist subject, not as a powerful cultural statement as with moko in New Zealand. In fact, one German publisher asked us if he could just use the photographs and discard the text. We declined.”

Mau Moko is described as the closest thing there is to a "complete" book on moko. It looks at the cultural and spiritual issues around moko and tells many powerful stories from moko wearers and artists. It is illustrated with images from early European encounters, and has new colour photography and traditional Māori representations.

Associate Professor Linda Waimarie Nikora, who also worked on Mau Moko, and Professor Te Awekotuku are currently researching the Māori way of death. They won a Marsden Fund grant of $950,000 to lead a team over three years to explore and record tangihanga practice.

The team has also secured $250,000 from the Nga Pae o te Maramatanga National Institute of Research Excellence to look at the historical and social change aspects of tangihanga.

It is likely that another significant publication, or series of smaller works, will emerge from the Tangi Research Programme.

Mau Moko still popular on the bookshelf is licensed under a Creative Commons Attribution 4.0 International License.