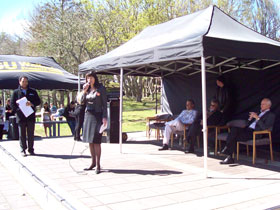 Who will be mayor?: Hamilton City mayoral candidate Julie Hardaker (centre) speaks to students as candidates (back left to right) Jack Gielen, Roger Hennerby and Bob Simcock wait their turn.

Hamilton City’s mayoral hopefuls braved the winds and took to the University of Waikato Village Green this week, as the local body elections get underway throughout the region.

Candidates in the race for mayor of Hamilton City Council were invited by the Waikato Student Union to speak at the WSU Mayoral Open Forum and present the key issues they see as relevant and important to Hamilton’s student community. Four of the six mayoral candidates attended the one-hour forum.

Waikato Student Union President Deni Tokunai officiated the open discussions, which also gave the small number of students gathered the opportunity to ask questions of the candidates. The two other candidates for Hamilton City mayor are community radio presenter Andrew Johnstone and adult entertainer Lisa Lewis. Overall, 39 candidates are standing for the 12 places on the council.