Men wanted to talk about pregnancy 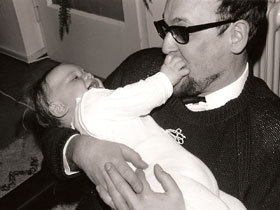 Men can get a raw deal during pregnancy – with attention often focussed on the mother and her ‘bump’.

Waikato University student Irene Lichtwark is researching the role of men and pregnancy for her honours degree but is having trouble finding men wanting to talk about their ‘pregnancy’ experience.

Her work is part of a larger Waikato study into pregnancy and stress and Lichtwark says she wants to talk to dads with babies younger than six months to hear about their reactions to pregnancy, their development as fathers and how they feel towards their child.

“New mothers find all sorts of opportunities to get together and to talk about what’s going on in their lives, but finding groups of new fathers is proving difficult,” says Lichtwark. She says her questions would take about an hour to get through.

“I think it’s important we have a better understanding of men’s role in pregnancy. There are instances where men get pregnancy symptoms, like food cravings, weight gain and even labour pains. The more we know, the better equipped the medical profession will be to deal with pregnancy issues.”

Men wanted to talk about pregnancy is licensed under a Creative Commons Attribution 4.0 International License.