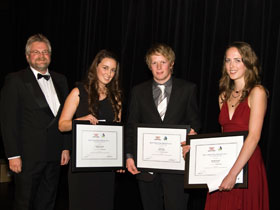 The awards were presented by the Association for Consulting Engineers NZ at the Innovate NZ Awards of Excellence dinner in New Plymouth on July 31.

Three awards were given in this category, of which Waikato University students won two. Petchell and Lynch will both receive $1500 for their efforts.

Bayleigh Petchell’s report focused on her work placement experience with global company ABB NZ; a leader in power and automation technologies. Petchell worked as a member of the maintenance crew, working on hydro power dams at Karapiro, Atiamuri, Arapuni and Waipapa. She hopes to work in the power generation industry once she completes her degree this year.

“My work there included working on the design of a new high-speed cheese slicer for Bega in Australia. This included helping with concept and design development. I also carried out calculations to ensure correct sizing of components and redesigned an existing linear drive to improve performance,” Lynch says.

The students’ reports were chosen by Waikato University placement co-ordinators for entry into the award.

“The achievements of these students are fantastic, especially considering this is a national award, meaning high levels of competition from all other New Zealand universities,” says University of Waikato Placement Co-ordinator Levinia Paku.