Nerds proving their worth in a crisis 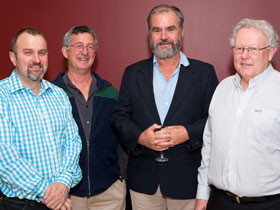 Dr Nevill-Manning was back on campus in late August to receive a prestigious Distinguished Alumni Award from Waikato, where he received his PhD in computer science in 1996.

He hosted two lectures during his recent trip home, including a public lecture called Nerds in a Crisis: Using Technology to Respond to Disasters. Dr Nevill-Manning, who founded Google's first remote engineering centre in New York, says recent disasters such as earthquakes in Haiti, Chile and China, and more recently the Pakistan floods, have showcased just what software engineers can do to help.

Improvements in internet access, combined with software development, have enabled new approaches to saving lives, Dr Nevill-Manning told the audience. Several organisations have developments underway, including Google, which allows staff 20% of time to work on ideas such as these to make a difference to people’s lives.

Dr Nevill-Manning said examples already in use included aerial and satellite maps overlaid with the nearest medical help in the wake of a disaster and sites containing names of missing people where the missing person or third parties can confirm they are alive. SMS and internet-based systems are also improving communication, allowing victims of a disaster to request help.

Nerds proving their worth in a crisis is licensed under a Creative Commons Attribution 4.0 International License.