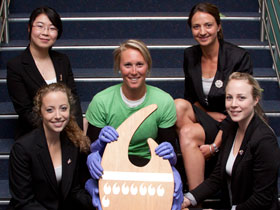 Twigg and Haigh are completing communication degrees at Waikato University and were part of the winning team in the finals of this year’s event for third year PR students, sponsored by the Chesterman Group. Four teams were selected from 14 to contest the finals in front of a panel of judges. The organisation under scrutiny was Parent to Parent, a national organisation with headquarters in Hamilton that works with families of disabled children.

Calling themselves Lime Light PR, the team of five used a caterpillar to butterfly metaphor to show how Parent to Parent could grow membership and improve its service delivery. Twigg bravely dressed as a caterpillar.

Students work on the project all semester, and have to research their organisation and relevant statistics, analyse and organise their information, come up with a communication strategy and present their work in written and oral forms.

The judges, all experienced PR professionals, said Lime Light’s strategy, which involved a six-step plan to improve and expand the relationship between Parent to Parent and paediatricians, was a simple idea, well executed, not too expensive and easily do-able.

Emma Twigg says she enjoyed the experience of doing the research for a real organisation, talking to families and paediatricians and creating the strategy. She says they were lucky the five women in the team got on so well. “We all brought different skills, and it all came together a lot easier than I thought. It was pretty full on though. Juliette and I are training twice a day, six and sometimes seven days a week, so we’d arrange meetings outside training hours, and sometimes the others would come out to Cambridge.”

The other team members were Sarah Booher, on exchange from Chapman University in Southern California, Qian Tracy Sun and Libby Baron.

John Campbell, national president of Parent to Parent, said he was impressed by the level of research and hard work put in by all teams and said his organisation did need to do better. “And with your ideas and research we can do better.” Two of the campaigns focused on improving relationships with paediatricians, one on improving integration for disabled children in mainstream schools, and another looked at ways to increase Māori awareness and use of the Parent to Parent organisation.

New Zealand rowers win off the water is licensed under a Creative Commons Attribution 4.0 International License.