Sixteen top scholarship winners gathered for a special afternoon tea last week with University of Waikato Vice-Chancellor Professor Roy Crawford to celebrate their success in gaining New Zealand Vice-Chancellors’ Committee (NZVCC) awards. Some of their fellow winners, of a total of thirty awards, were not able to attend the function. Some are currently overseas, supported by the funding they have won.

Twenty-six Waikato students from a range of disciplines currently hold thirty NZVCC scholarships worth more than $1,000,000 in total, including travel grants, research expenses, fees and living allowances for those heading for advanced study overseas.

The graduate and postgraduate students include Tehnuka Ilanko, who’s won a prestigious William Georgetti scholarship plus another scholarship from the Cambridge Commonwealth Trust to study for a PhD in volcanology at Cambridge University in the UK.

Also present was Ashley Easter, the University’s first winner of a $300,000+ Woolf Fisher Scholarship. Ashley is also off to Cambridge for doctoral studies in molecular biology. 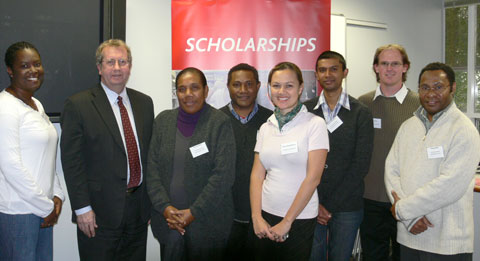