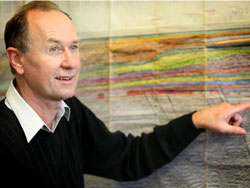 The North Island once had a range of mountains to rival the Southern Alps, but it has long since eroded away. That’s just one of the findings from recent research at Waikato University into the country’s geological history, and though it may seem an arcane piece of information it has considerable relevance for the current search for new petroleum reserves.

“Our rationale is to generate information about the characteristics of our sedimentary basins to provide information that’s available to exploration companies,” says Professor Peter Kamp, who heads the research group.

The more information companies have; the more comprehensive their exploration programme is likely to be. Working in turn with data from the exploration companies, as well as doing their own onshore geological mapping, his group is developing a much clearer picture of the country’s past 40 million years.

Several geological features and processes need to come together to produce a petroleum deposit, Professor Kamp says. First, there has to be a source; in New Zealand this is usually a coal deposit.

But for this to generate oil and gas it has to be heated to between 100 and 130 degrees, which means it needs to be buried to a specific depth – about four to five kilometres.

“The gas and oil then migrate upwards until they find a suitable reservoir – usually a porous sandstone or limestone, and that has to be sealed by an impervious mudstone layer. Probably the majority of the oil that’s been generated over geological time around the world has leaked away and has been degraded by marine organisms.”

Professor Kamp says the oil companies are acutely aware of the importance of knowing a region’s geological history, but in international terms even Taranaki would be regarded as a frontier area.

“Two years ago I spoke with a guy from an American company which had a licence area on the east coast, and he had to make a decision about whether to drill a hole. That’s a multi-million dollar decision, and he said, you’re telling me we don’t know where my rocks were 10 million years ago. And that’s the problem with the east coast region – 10 million years ago it didn’t look anything like it does today. Those rocks have been through the mill.”

Slowly though, a clearer picture is beginning to emerge. Professor Kamp’s group, in collaboration with Penn State University, is developing a computer model which shows that 40 million years ago New Zealand’s continental crust was stretching, thinning and subsiding, allowing the sea to inundate much of the country.

Marine sediments, including Waitomo’s limestones, were formed at this time. Then, starting from 27 million years ago, the Pacific Plate began pushing up against and sliding both underneath and over the Australian Plate.

The rocks within Canterbury lay well to the east of their current position, and as they moved westwards the crust in the region now occupied by Hawke’s Bay and Wairarapa became compressed, pushing up a mountain range which Professor Kamp refers to informally as the Northern Alps. And as the range went up, erosion wore the elevated crust away.

“Those mountains no longer exist; the modern axial ranges have only formed in the last two million years. There would have been 10 to 20 kilometres of crust eroded from those Northern Alps, and that would have generated a lot of the sediment that we find in the Taranaki Basin and off the east coast. So this is a new result which has come out of our model.”

He says Taranaki is in a good position to have oil and gas because it has been on the margins of all the plate boundary activity, being deformed just enough to create petroleum-trapping structures, and receiving enough sediment to bury its coal to the right depth.

“The Canterbury shelf is in a similar position but on the opposite side of the plate boundary. The Great South Basin is a bit further away and it hasn’t actually received much sediment from the boundary zone, so it doesn’t have a late burial history, and it’s an area where there’s a lot of exploration going on. The west coast of the South Island has been too close to the plate boundary, and the east coast of the North Island has been within the boundary itself.”

The model his group has developed is, he says, fundamental to all aspects of New Zealand geology, explaining among other things the history of the North Island’s volcanism. It also helps explain the evolution of species such as moa.

“Biologists are interested in how the geography of New Zealand has changed. We recently had an interesting involvement with people from several institutions who had generated very nice data on moa evolution from DNA extracted from fossil bones. It turns out that the uplift of the Southern Alps, starting eight million years ago, isolated moa into different habitats, driving evolution into new species. We validated the predictions of the DNA clock with evidence from geology, and it all made sense.”

Professor Kamp says that while there’s always the chance things can go wrong with offshore oil exploration and production, New Zealand has a very good regulatory regime with quite strict controls compared to many other jurisdictions. Oil from the Tui Field is already the country’s third greatest export in terms of value, ahead of sheep and beef meat.

“Its composition is such that it can’t easily be dealt with by the refinery at Marsden Point, so it’s pumped directly out of the well head on to ships. That helps to balance out the cost of importing oil, and is a big contributor to the New Zealand economy at a critical moment. Having achieved this level of export we presumably want to maintain it and the only way to do so is to keep exploring.”