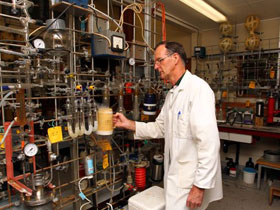 A study of an ancient climate anomaly at Waikato University’s Radiocarbon Dating Laboratory has led to refinements in dating techniques that have allowed the laboratory to date material up to 60,000 years old with unprecedented precision.

Director Dr Alan Hogg says the original study was triggered by a strange set of results from limestone deposits in the Bahamas, which appeared to show there was a remarkable spike in atmospheric carbon 14 (C14) about 38-40,000 years ago. Very little wood from that period has been preserved anywhere, but some New Zealand kauri fit the bill.

“People were proposing catastrophic meteor impacts, all sorts of explanations, and we were interested to see if we could find those deviations in wood, because wood is the gold standard for measuring C14,” Dr Hogg says.

“We measured various trees from that time period and found nothing unusual, and we’ve subsequently found those huge spikes in C14 were analytical errors by the lab that made the counts. So we were never going to find it.”

In order to work on this ancient wood, however, Dr Hogg says they had to refine their techniques, and made significant advances as a result.

There are two ways to count C14. Dr Hogg mostly works with radiometric methods, which involve counting the bursts of radiation given off when a C14 atom decays. The older a sample is, the fewer C14 atoms remain, and the fewer radioactive decays there are. Carbon dating can only be performed on material less than about 60,000 years old; any older than this and there is insufficient C14 to count.

With the other technique, known as accelerator mass spectrometry (AMS), the carbon 14 atoms are separated from the more common, non-radioactive carbon 12 on the basis of their mass, and counted directly.Dr Hogg says the two techniques each have their strengths and weaknesses.

“For the work we’re doing on large trees radiometric is unsurpassed, because you’ve got large samples and any small laboratory errors get masked by the size of the sample. But because the samples are large there’s a lot of work involved. AMS requires very small samples, less than a tenth of a gram. They require less pre-treatment, and you can handle 10 or 20 samples at once, which keeps the cost down.”

To achieve the precision needed to work on ancient wood, the laboratory used samples that were three times as large as normal. Vials containing the material to be dated had to be larger, and manufactured to exact specifications from synthetic silica imported from Germany. The laboratory also developed high-quality, impervious stoppers for the vials, which they now sell to other carbon dating labs overseas.

Radiometric dating is a long, convoluted process. “It’s all done in vacuum lines, to keep atmospheric contaminants out. And if we run something that’s only a few hundred years old it can leave a signal behind in the vacuum lines. If you then run something that’s 40,000 years old, you’ll find it’s been contaminated to the tune of maybe 100 or 200 years due to activity picked up from the young sample.”

This can be avoided if samples of similar age are run together. The laboratory also has kauri dated by other techniques which is 170,000 years old, and essentially has no C14, so running it through the lines first cleans most of the contaminants out of the system.

Even so, inevitable contamination means that when dating a piece wood of this age a small number of radioactive decays will be recorded, and this figure needs to be subtracted from counts for younger material before dates can be calculated. “Otherwise your results are going to be all over the shop.”

Increasing the length of time for each count was another way of improving dating precision. Ten thousand minutes per sample – about a week – gives a good return for the effort, he says. The laboratory has worked extensively with kauri logs excavated from bogs and farmland, mostly with the aim of reconstructing past climates.

“We know the earth’s getting warmer, but everyone’s trying to find out whether it’s driven by CO2 and greenhouse gas, or part of a natural cycle. Until you can define the natural cycles accurately we really can’t answer that question. That’s why the scientific community is split between people who believe that anthropogenic warming is causing climate change, and others who are saying climate has always changed in some sort of cyclic form, and we’re on a warming part of the curve.”

Dr Hogg says it’s fascinating work. “We get the most magnificent kauri coming out of the bogs and they’re just a joy to work with because the data is such good quality. And the environmental conditions that the tree was growing in are locked in the tree just waiting for someone to find them.”