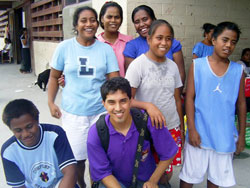 Fulbright Fellow: Mike Roman (bottom centre) focuses on the lives of migrants from Kiribati as part of his PhD.

A former Peace Corps volunteer who turned his 20-month posting to the tiny Pacific Island nation of Kiribati into a ten-year project is spending a year as a Fulbright Fellow at the University of Waikato.

Mike Roman is researching the lives of migrants from Kiribati as part of his PhD on what happens to the language and culture of I-Kiribati (as people from the islands are known) when they leave their homeland.

“People in Kiribati see migration as a way to deal with the economic and ecological realities of this low-lying island nation,” he says. New Zealand is a key destination, and accepts 75 migrants a year under the Pacific Access Category migration scheme as well as more temporary migrants through seasonal employment schemes.

Roman says the research is a capstone to ten years’ work. “I was a migrant to their world, through Peace Corps, and now they are migrants to my world. It’s given me two different perspectives on migration, and made me a better global citizen. And that’s something I try to share with the anthropology students I tutor at Waikato.”

Based at the University of Pittsburgh, Roman secured prestigious Fulbright funding for his fieldwork, and chose to come to the University of Waikato because of Hamilton’s relatively large I-Kiribati population.

“I’m doing a comparative study of I-Kiribati communities in the US, New Zealand and Fiji,” he says. “The continental US population is tiny, less than 200; here, there’s definitely more than 200 in the city of Hamilton!”

It helps too that there are family connections in Hamilton. Roman is married to an I-Kiribati woman, and while she’s remained in the US to complete her medical studies, Roman has been welcomed by her relatives into the I-Kiribati community, and works side by side with many of them in pack houses and glasshouses.

“They thought it was weird I didn’t have a job,” he says. “Sitting around asking questions didn’t seem like work to them, so I’ve started doing some tutoring at the university.”

Roman says going to Kiribati changed his life, but it didn’t start out too well. Although he’d stipulated on his Peace Corps application that he was prone to seasickness and allergic to fish, he was posted to the smallest island in the isolated chain of atolls to teach in the local primary school for nearly two years.

“I basically survived on flour and water,” he recalls. “I made tortillas – I come from a Mexican background – and I got very good at making these very quickly.”

He also had to learn the local language and culture, and the rest, he says, is history.

In addition to his research in Hamilton, he’s made it his business to encourage some of the youth “I-Kiwibas” in the community to make the transition from the pack house into tertiary education. “Most kids follow their parents into this kind of work,” he says. “It’s the tall poppy syndrome. But these kids have got so much potential.”

Earlier this year, he arranged a special day at the University for 15 I-Kiribati youth to introduce them to the campus and what’s on offer at Waikato. One of those students has now enrolled in a Certificate of University Preparation, and hopes to go on to university.

Roman is hoping she’ll start a chain reaction within the Kiribati community. He’s seen it happen before, he says. “Back in the US when my wife got her driver’s licence, suddenly everyone we knew started to get their driver’s licences.”