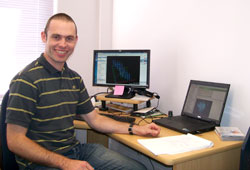 A penchant for pulling things apart has landed a University of Waikato doctoral graduate a plum job as a research and development engineer with Christchurch-based tech development company ARANZ.

“It drove my parents mad when I was a kid,” says Kirk Spragg, “but I was trying to find out how things worked.” The former Ngaruawahia High School student went on to complete an honours degree in applied mathematics at Waikato, followed by doctoral studies.

His research was on magnetohydrodynamics – the motion of liquid metals and how they interact with magnetic fields – and involved lots of playing around with gallium, a metal which like mercury is liquid at room temperature.

On top of his PhD research, he also learnt a lot of French – spending more than two years at the prestigious EPM-Madylam lab in Grenoble, in the south of France. “I had to use French in the lab,” he says. “It’s surprising what you can learn when you really have to.”

Spragg, who will receive his doctorate at the University’s marae graduation ceremony on April 16, has now taken his talents into the workplace. He started at ARANZ in November as an intern with the company’s geological modelling team, and has been offered a permanent job.

“My job is to research and prototype robust algorithms for software,” he says. “I’m currently developing new features for Leapfrog, which is used in the mining and exploration industries to interpolate ore sample data and create a 3D model of what’s down there.”