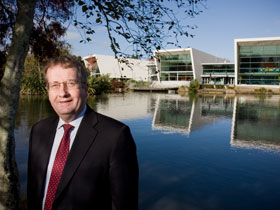 Leading tertiary education providers in the Bay of Plenty, the University of Waikato and Bay of Plenty Polytechnic, are committed to their partnership which forms the cornerstone of the development of an enhanced tertiary sector for the region.

Bay of Plenty Polytechnic and Waikato University – which make up the Bay of Plenty Tertiary Partnership, are working closely with Priority One, Smart Growth and the Tauranga City and Western Bay and Environment Bay of Plenty Councils to define regional priority needs for educational and research development.

The Tertiary Needs Analysis was completed in February 2010 resulting in a regional Tertiary Action Plan which was developed by Priority One, and this week approved by SmartGrowth.

Bay of Plenty Polytechnic Chief Executive Dr Alan Hampton says the two institutions are enthusiastic about the significant level of community support. “Delivering the prioritised outcomes set out within the Plan is now the task of the Partnership.

“We know together we are ideally positioned to provide opportunities for young and mature people to study for polytechnic or university qualifications without leaving the region. By working with local business and civic leaders we can ensure to offer the training, education, and research that will enhance regional industries,” Dr Hampton says.

University Vice-Chancellor Professor Roy Crawford says both organisations are delighted to accept the challenge and that work is proceeding.

“We know that enhanced tertiary provision in the Bay of Plenty has the potential to make a significant economic contribution to this region; tertiary education is a key economic driver,” he says.

“And as well as teaching, it is important for the Bay that we develop research and commercialisation through a collaborative approach which will also contribute to regional prosperity.”

The University’s Council has approved further investigation into CBD-based presence in Tauranga through the partnership with Bay of Plenty Polytechnic. The concept would be dependent on TEC funding of domestic student growth, third party funding and regional commitment and support.