Playing without a ref

Ultimate Frisbee, even when it’s played at top level is unusual in that it doesn’t have an umpire or referee. The players referee themselves – they know the rules and the spirit in which the game should be played. 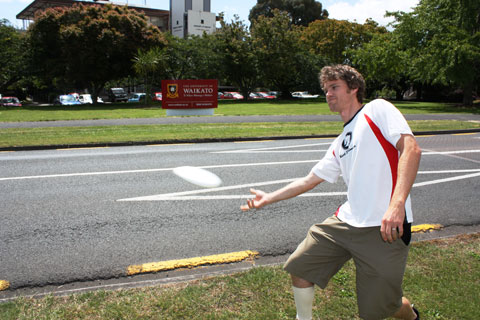 To play without anyone blowing the whistle relies entirely on honesty and fair play – or as Waikato University PhD student Hamish Crocket says, it comes down to ethics – individual and team.

Crocket’s doctorate is focussing on ethics, and Ultimate Frisbee players will be his main source of research. They will be interviewed and observed in New Zealand and at international tournaments Crocket attends as captain and coach for the Hammertron team. Ultimate Frisbee is competitive frisbee played by teams on a sports field.

Crocket's previous degrees are in physical education and philosophy and he’s taught PE, but it was his own behaviour on the turf that saw him throw in hockey for Ultimate Frisbee. “It should’ve been about skill and teamwork, but I found that gamesmanship was making me nasty, that I’d try anything to win. I stopped playing mainstream competitive sport and started thinking about the ethics of sport.”

He says businesses, probably prompted by some well-publicised scandals, will often have a code of ethics as part of their company policy, but he thinks when it comes to sport, ethics have been neglected. “Should Thierry Henry have admitted his ‘hand of frog’ in France’s world cup qualifying match against Ireland? Should you walk in cricket if you know you’re out? Ethics isn’t just about playing by the rules, ethics is a process of deliberately restricting our own freedom in order to become a particular type of person,” says Crocket.

However, games are played to win, and some people have fiercely competitive natures and like to win at any cost. In most sports the ref makes a quick decision and the game moves on. In Ultimate Frisbee it is up to the players to make these decisions. While this sometimes results in drawn out discussions, most games flow with relatively few stoppages. Crocket suggests that this is because Ultimate players usually prefer to get on with playing the game than to continue an irresolvable argument. However, serious disagreements do happen in ultimate from time to time, and how these occur and are managed without referees is of particular interest to Crocket.

“I want to find out how ethics plays a role, often in tight and competitive situations – what prompts people to behave ethically, or not.” Crocket says players put themselves in difficult and tense situations and how they manage those difficult moments when they may overstep the boundaries is the point that interests him most. “It’s not just about your own behaviour, but also how you interact and treat the opposition.”

It’s hard to imagine rugby or netball not having a ref or umpire in control, but Crocket’s supervisor Associate Professor Bob Rinehart says Crocket's work has the potential to influence other more dominant sports. “Sport forms like rugby, football, and others, may reconsider their own basic positions on what is ethical behaviour. If sport is to teach us (especially children) how to behave in society as fellow citizens, then his major 're-think' of what behaviours we do, how we treat one another on the pitch, how we embody our 'belief systems', is vital to a fundamental re-think of dominant sport forms' ethics.”

Hamish Crocket will carry out in depth interviewers with Frisbee players, but not his Hammertron team mates; he knows them too well, and he’ll also do a lot of observing at the various tournaments he attends and participates in. “Sport is bound up in rules, yet ethics are not only rules, they’re a socially negotiated set of values that are not bound by a permanent notion of right or wrong, so we have to look at them at localised levels.”