Plenty of work for volcanologists in ‘peacetime’

In the two and a half years since volcanologist Adrian Pittari arrived in New Zealand this country has had precisely one volcanic eruption. But, he says, there’s still plenty to keep him busy in what he refers to as “peacetime”. “We have a lot of extinct volcanoes here in the Waikato, which make the job of geology very interesting.”

The lecturer at Waikato University’s Department of Earth and Ocean Sciences is also studying the much more active volcanic zone around Tongariro. At Ngauruhoe, one of his students has been exploring the inner crater which formed in a 1954 eruption. The bottom of the crater has filled in with rubble, and it’s possible to clamber down one side that slopes relatively gently. 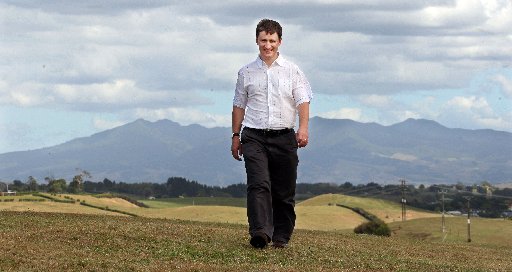 “From there you can scramble up the side of the slope, and you can get down from a bit of a ledge at the top, but there’s a section in the middle that you just can’t access. We do what we call a stratigraphic log, where we make observations and measurements of the sequence of layers left by eruptions, and we collect samples that we bring home to the lab.”

The studies are shedding light on the styles of eruption the mountain produces, which vary between two types, named after Italian island volcanoes. Strombolian eruptions are discrete sprays of lava that at night look like fireworks displays, while the more violent Vulcanian style of eruption produces a lot more ash, and occasionally fast-moving pyroclastic flows of hot gas and rock.

“They’re also very loud; in the 1975 eruption on Ngauruhoe the blasts were heard here in Hamilton. Ngauruhoe’s well overdue for an eruption, it’s been 35 years since the last one. From the early 1800s to 1975 there were 60 or 70, so an eruption every couple of years or so.”

Dr Pittari also has students working on the South Auckland field around Pukekohe and Waikato Heads, which was active between 1.6 million and half a million years ago. This is one of four similar fields extending from Auckland (the most recent) down to the so-called Okete Volcanics around Raglan; the Bridal Veil Falls run over a lava flow of this field.

All these volcanoes are the result of single eruptions, rather than being built up by a series of events as has happened with the mountains of the Tongariro region. The approximately 100 volcanoes of the South Auckland field are more heavily eroded than those of Auckland – the weathering of this volcanic material has given rise to the region’s famously fertile soils – but some, such as Pukekohe Hill and Pukekawa, are still plainly visible.

Pukekohe Hill is a lava shield a bit like Rangitoto Island, Dr Pittari says. “Basically we select a couple of volcanic centres and place a student on them, and they do the same thing we’re doing at Ngauruhoe, such as stratigraphic logs, or doing sections through the deposit. These can be at road cuttings, or cliff exposures on farms. We’re finding the farmers are quite happy and friendly up in that region, quite interested to know what’s on their farms.”

The students then bring samples back to the lab and analyse the minerals chemically and microscopically. One recently completed study has shown the material around one volcanic centre has in part come from a powerful ground level blast spreading radially outwards, known as a base surge.

“The term comes from 1960s bomb tests in the Pacific. At the same time they were doing those bomb blasts there were eruptions in Iceland and the Philippines, and both showed a very similar base surge. So they copied the expression to a volcanic setting and it stuck. The eruption in Tonga last year was the same kind of event.”

In the 10 years since beginning his PhD, Dr Pittari has done field work in the Canary Islands, Canada, and even in his native Australia, which although geologically stable today does have some volcanoes.

In general, Australian volcanology is concerned with older rocks, many of which are relevant to the minerals industry. While doing postdoctoral studies at Monash University in Melbourne he also studied kimberlites from Saskatchewan, Canada, which are the long-cooled remains of magma that has erupted rapidly from deep within the Earth.

They are the main source of diamonds, and mining companies are interested in the processes that concentrate diamonds in different parts of the kimberlite deposits, commonly known as pipes. “I never actually saw any diamonds because the proportions are so low, and most are sand size. I’d be lucky to see a gem, and if I did I’d definitely not be allowed to touch it!”

There’s no chance of getting diamonds from any of New Zealand’s volcanoes he says. The kimberlite pipes only erupt through very old continental crusts in the centre of continents. The crust under New Zealand just isn’t thick enough.

Volcanism has, however, provided the Coromandel with its gold and silver deposits. These have been precipitated from geothermal waters percolating through the rock, along with quartz. The same process is probably also occurring within the Taupo Volcanic Zone, Dr Pittari says, although because the area is currently active and the appropriate geology is very deep, any precious metals would be very difficult to access.

“The Coromandels are an old volcanic region; they’re well eroded, so the parts of the volcanoes that at one time were at depth are now exposed closer to the surface. They were the precursor of the Taupo Volcanic Zone, and represent a time when the whole tectonic setting was rotated.

Today the subduction zone is off the coast of Hawkes Bay, where the Pacific Plate is folding down under the Australian Plate, and the Taupo Volcanic Zone is the result of magmas rising off the edge of that subducting plate.”

Although the Taupo Volcanic Zone – which runs from Ruapehu to White Island – is fairly well understood, the origin of the volcanoes that run from Karioi to Tokanui (including Pirongia and Kakepuku) is still something of a mystery. “If you draw a line through them, they are actually perpendicular to the Taupo Volcanic Zone,” says Dr Pittari.

“Does it represent a tear in the subducting slab? It mustn’t be a coincidence, but why that should be so we’re not sure.”

Plenty of work for volcanologists in ‘peacetime’ is licensed under a Creative Commons Attribution 4.0 International License.