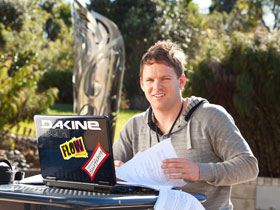 Making the switch: James Thomlinson is becoming a teacher after several years as a plumber.

It may seem like a radical change of professions to some, but James Thomlinson says training to become a primary school teacher after five years as a plumber feels like a natural progression.

James, 24, is currently in his first year of the Bachelor of Teaching (Primary) programme at the University of Waikato in Tauranga.

While grateful for the valuable skills he has learnt in his trade, James always felt he had something more to offer. That something proved to be working with primary children.

“What I really enjoyed was being around the kids while we worked in schools fixing drinking fountains or servicing the toilets and taps. I found that I liked teaching them new things. Kids just light up when they learn new skills and that’s really rewarding,” says James.

As well as seeing the need for more men in the profession James chose primary teaching because he felt that is where he could be most influential.

“I want to make a difference earlier on in their lives and I prefer the idea of teaching a range of subjects. I’ve really enjoyed learning new things like music, PE and art and understanding why it’s important that we teach these subjects in primary school.”

Spurred on by lots of support from his former employer, mates and family, James says the move to a female-dominated profession from a predominantly male trade hasn’t deterred him at all.

“It’s a selfless environment and I like that. You are there because you want to help. You do have to be confident in your abilities, but when you’re passionate about something don’t let anyone tell you differently. Go hard and go for it,” he says.