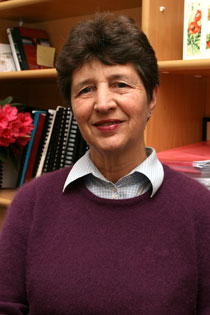 Waikato University Engineering Professor Janis Swan has been awarded the JC Andrews Memorial Award, the most prestigious award bestowed by the New Zealand Institute of Food Science and Technology Inc.

The award, presented in late June at the organisation’s annual conference, is made in recognition of the recipient’s substantial contribution to science and technology in the food industry. It commemorates Massey University’s first Chancellor, Dr John Clark Andrews, who proposed that a food technology degree course be established at Massey University in the early 1960s.

Professor Swan was in the first graduating class of the biotechnology programme in Massey’s BTech degree. The engineering-based programme had been developed to address the needs of the developing biotechnology industry sector in New Zealand, and emphasised the need to combine process engineering principles and biological science to convert discoveries to large-scale commercial production.

Before coming to Waikato University in 1997, Professor Swan worked in the food industry, completed a PhD in chemical engineering and worked in meat industry research for many years. In 2009, she was made a Member of the New Zealand Order of Merit for her services to engineering