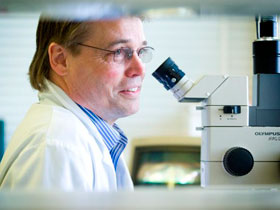 Dr Ian Hogg: Has recently returned from the four-day meeting of the International Barcode of Life steering committee in Guelph, Ontario.

An international project to introduce a ‘barcode’ system to identify all animal species has been officially launched in Canada. Waikato University’s Dr Ian Hogg was New Zealand’s representative at the four-day meeting of the International Barcode of Life steering committee in Guelph, Ontario in late September.

“On the one hand it was a bit of a celebration that all the member countries have come together and it’s now a fully functional and operational entity, and secondly it was a chance to come up with plans for how we will see the next five-year period through,” the senior lecturer says. “The CN tower in Toronto was lit up with a giant barcode of the Canadian beaver, in honour of the event – it was very impressive.”

About 25 countries are currently involved with the project, although at this early stage several areas with significant biodiversity, particularly in Africa, remain under-represented.

The barcoding concept is based on the premise that animals can be identified by a single gene that occurs in different forms in all species and which, thanks to advances in molecular biology, can now be rapidly isolated and sequenced.

“We start with an animal that has been identified by an expert, and then take a tissue sample from it and analyse its DNA barcode sequence, which is then catalogued. On the basis of that connection between the identification and the gene, the next time we encounter that animal we’ll know exactly what it is because it’ll have the same barcode. The idea is to build up a library that contains all of the species from all parts of the world.”

Dr Hogg says that of the roughly two million described species on the planet, about 100,000 have already been bar-coded. “It’s really just got going within the last few years, although it’s been an idea that people have been working on for the last decade.”

The gene, known as COI (pronounced ‘co – one’), codes for a fundamental respiratory enzyme. It occurs in the cell’s energy factories, the mitochondria, rather than in the nucleus, and is very stable from generation to generation, mutating at a very slow rate. Although mutations may give rise to a small amount of variability in the gene within a particular species, this is minor compared to the differences between species.

This means that even if a sequenced COI gene from a newly collected animal doesn’t precisely match a catalogued sequence, it may still be possible to identify it as a known species. Although COI also occurs in plants, plant COI evolves too slowly to be used for bar-coding; two sequences found in chloroplasts (the cell structures involved in photosynthesis) have been identified for this purpose.

Dr Hogg, whose specialty is freshwater and Antarctic invertebrates, says Waikato University has been closely involved with the project from the beginning, and all New Zealand universities now have bar-coding programmes.