Public lecture to explore what lies behind talent 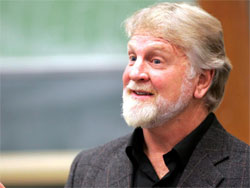 You’ve only got to look at the front cover of any popular magazine to realise that we’re all fascinated by the life stories of exceptional achievers. But what is it about these people or their backgrounds that enables them to develop their talents and achieve so highly?

It’s the topic of the second University of Waikato Inaugural Professorial Lecture for 2010, to be held on Tuesday August 17. The free public lectures are the university’s way of formally introducing new and recently appointed professors to the wider community.

Professor Roger Moltzen of the Faculty of Education, who’s an expert on gifted and talented education, will discuss critical issues emerging from the research in this relatively new field of inquiry.

“My primary interest is finding out more about how talent develops that could be relevant to teachers, parents, policy-makers and the like,” says Professor Moltzen, who began his career as a teacher.

"The research shows that those identified as gifted as children do not necessarily become outstanding adult achievers. Conversely, not all eminent adults were seen as having the potential they later realised. In fact amongst the gifted adult group one finds many examples of individuals who as children were described as odd or eccentric."

But one thing is clear, he says: there’s no simple recipe for creating a genius.

“The development of talent is very much an individual process and not easily understood,” he says. “So it’s foolhardy – although probably commercially very tempting – to propose a set of across-the-board practices for achieving success.

“And there’s not a shred of research evidence that these ready-made packages to turn your child into a genius actually work.”

Professor Moltzen has spent two decades researching exceptional achievers, including improving education provisions for gifted and talented children and young people. More recently he’s also been looking at how talent develops across the lifespan, and for his PhD, he worked with 28 outstanding New Zealanders, across fields such as politics, business, dance, writing, music, science, mathematics and sport.

Public lecture to explore what lies behind talent is licensed under a Creative Commons Attribution 4.0 International License.