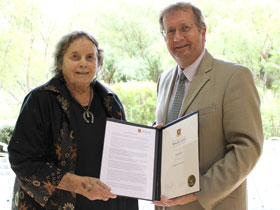 One of Waikato University’s best-known and longest serving professors is retiring. Professor Jane Ritchie has spent 35 years researching topics that have helped shape legislation and behaviours in New Zealand, and the university has seen fit to acknowledge her contribution to the institution and wider community by conferring on her the title of Emeritus Professor.

Professor Ritchie joined the university as a postdoctoral fellow in 1973 and was appointed professor in 1995. During her career, she studied child rearing patterns, physical discipline – decades before the recent repeal of the Crimes Act - adolescent development, violence and eating disorders. Internationally her work on physical punishment triggered a major wave of research into family violence.

Professor Ritchie’s husband, the late Professor James Ritchie, was often her co-author.  “I’m proud of the seven books I wrote with James,” she says. “Together we worked for 30 years, urging New Zealanders forgo the use of physical punishment in favour of more peaceful and effective child rearing techniques.”

“We were the first university in New Zealand to offer a course on Women and Psychology, and under Professor Ritchie’s leadership the programme grew significantly. More than that, it drew people, particularly women, often mature women, to the campus and provided an accessible and supportive pathway into university study.” She taught the course for 35 years, as well as courses in violence in family and society and never had a day off through illness.

Professor Ritchie served on many organisations relevant to her role as a mother of five and to her research. In 1989 she was awarded an OBE; in 1993 she was recognised by the New Zealand Psychological Society as a Pioneer Woman in Psychology in New Zealand. This year, she was awarded an Honorary Fellowship by the Society.

“Professor Ritchie has been a first rate ambassador for Waikato, enthusing students with her warmth, knowledge and intellectual challenge,” said Professor Crawford. “She moved seamlessly between the university and the wider community, and her commitment to informing parenting practices that nurture growth physically, emotionally and intellectually deserves to be valued and recognised.”