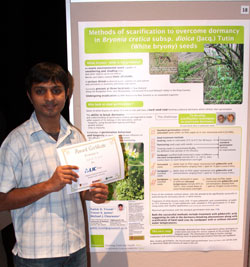 Research by a Waikato University student may help to contain the spread of two emerging weeds. Pathik Trivedi, who is about to complete his MSc, was one of three prize winners when he presented his work on white bryony at a recent Sustainable Bioeconomy Student Poster Conference at the university.

The plant is a cucumber-like vine with small white flowers that scrambles over other vegetation, eventually smothering it.

To date it has been found in New Zealand only in two areas – near Mangaweka in the Rangitikei valley and around Aria and Mokauiti in the King Country – which means there is a real chance of eradicating it before it spreads further. If this is to be done it’s necessary to know how long its seed can survive in the soil.

This can be a very long time indeed for some species, so weed biologists normally speed the process up by subjecting the seeds to high temperatures and humidity, a technique known as accelerated aging. White bryony, however, posed a problem.

“We had to try some different methods to see what helps the seed in germinating because normally they pass through a bird’s gut,” Trivedi says. “It’s not easy to get the seed to germinate in a laboratory environment, so I tried all sorts of different methods, and just a few of them were successful.”

Eventually Trivedi came up with a technique that involved immersing the seeds in hot water, abrading their coats with sandpaper, and laying them on filter paper moistened with a growth hormone.

This will enable other weed specialists to test the viability of seeds subjected to the accelerated aging process for varying lengths of time, and from that work out how long they will need to monitor white bryony-infested sites for regrowth after weed control is carried out.

His MSc thesis, however, has focused on broomcorn millet, a large grass which is becoming a significant pest of maize and sweetcorn crops around Gisborne and Hawkes Bay.

Supervised by Dr Michael Clearwater at the university and Dr Trevor James at Agresearch, Trivedi has been assessing the temperatures at which the millet germinates and the depth from which it is able to emerge in various New Zealand soil types, and says the news is not good for the Waikato, in the likely event that it reaches here.

“In the South Island it might not have that much impact, but definitely if it was in the Waikato it could be a problem because the average temperature here in summer is really suitable for this species. The main problem is it’s a prolific seed producer and could spread really fast through a big area if care is not taken.”

He says his accelerated aging trials show broomcorn millet seed, which is mostly spread by agricultural machinery, could survive in the soil for up to five years.