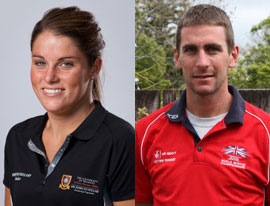 Grant, who’s the current world champion in the lightweight single scull, will defend his title at this year’s World Rowing Championships being held at Lake Karapiro on October 30 to November 7. He is studying towards a Bachelor of Electronic Commerce degree.

Hannah, Grant and King are all Sir Edmund Hillary Scholars. The Hillary Scholarship Programme awards full fee scholarships to academic high achievers who show significant leadership qualities and excel in either sport or the creative and performing arts.

Forty Blues Awards were given out to athletes and artists at the awards evening held at the university’s WEL Energy Trust Academy of Performing Arts. Athletes and artists represented a range of disciplines from beach volleyball, judo and badminton to performance, composition and singing.

In other awards: The Waikato Unicol AFC soccer team won the University Club of the Year; Reid Hall (soccer) won Sports Coach of the Year; Pia Scott-Kristensen (soccer) won the Service of the Year Award; and Marleen Charng (kendo) won the Long Service Award for more than 10 years of service.