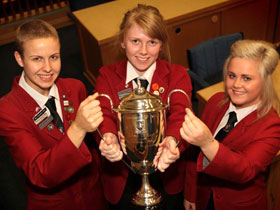 A team of students from Sacred Heart Girls’ College emerged victorious against Matamata College on 8 June, as Te Piringa – Faculty of Law hosted the finals of the Secondary Schools’ Mooting Competition at the High Court in Hamilton.

The mooting competition pits teams against each other on points of law. The two teams argued an appeal on whether a mother should be allowed to relocate from Hamilton to Sydney with her children. The competitors were asked to consider two points: firstly if the judge, in allowing the relocation, would be giving to much weight to the mother’s personal circumstances and parental conflict, and not enough weight to the importance of both parents being involved in the children’s lives; and secondly, whether the judge had based their decision regarding one child’s views more highly than the other’s.

The competition judges, senior family law practitioner Murray Earl, and family court judge Rosemary Riddell, were very impressed with the standard of mooting, and enjoyed seeing the mooters engage with the bench, rather than simply delivering a speech to the judges.

The Sacred Heart students from the winning team, Rochelle Monk, Lydia McKinnon and Leah Caddigan, each received a $3,000 scholarship to assist with their first year of study in Law at the University of Waikato.

Sacred Heart student Lydia McKinnon won the Best Individual Mooter award, as well as being in the winning team. Lydia will receive $500 cash for her achievement.

“Lydia showed a level of maturity, confidence and poise not often seen in mooters even at a more advanced level,” says Waikato’s Director of Clinical Legal Education Christina ter Haar.

The Mooting Competition has grown significantly since its establishment in 2001, with more teams of students entering the competition each year.