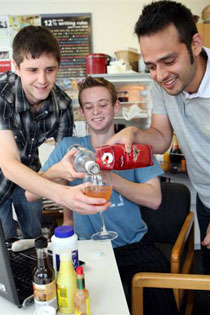 Straight from the kitchen:A group of Waikato University computer science students prove that context-aware systems can operate just about anywhere.

GPS systems are everywhere these days, and smart phones are coming up fast behind. But the kitchen might seem an odd place to find a context-aware system – a computer system that’s aware of its physical environment.

Not for a group of University of Waikato computer science students, who’ve brought computers into the kitchen to help them cook up a storm.

It was University of Waikato computer science student Yaver Mir’s first-ever attempt at mixing a cocktail, and although the Bloody Mary turned out a little salty (plus it was missing the vodka), the computer software demo worked.

Mir and his student team-mates – Jordan Schwab, Jeremy Tuson, Robert Collard and Steven Marsh – were trialling software they’d developed for a University course on context-aware information systems. Their program guided Mir through the cocktail recipe step by step – the perfect aid for the inexperienced cook or bar-tender.

Senior lecturer Dr Annika Hinze, who developed the Waikato course for senior students, says they had to work in teams and come up with a practical application of a context-aware system.

“Context-aware systems behave differently depending on what’s around them, such as who or where the user is,” she says. Examples include GPS systems and ‘smart’ phones that might, for example, detect that the user is currently in a meeting room and so reject any unimportant calls.

Unusually for an all-male group, Mir and his classmates came up with an idea for the kitchen. Their system builds on a fridge monitor that’s been developed by Denmark-based Innovation Lab (http://www.innovationlab.dk/en/node/3278).

“Most of the other students on the course used location as a context,” says Tuson, who’s just completing his Bachelor of Computing and Mathematical Sciences (BCMS). “This is a bit different – the context is what’s in the fridge.

“What we’ve built is actually a program that has an inventory (ie a list of what’s in the fridge or pantry) linked to a server with a bunch of recipes, so the system picks a recipe that fits what you’ve got and then guides you through how to cook it.”

The system consists of an audio-visual program and a barcode scanner like the one used in supermarkets. The user has to scan each ingredient before the computer will move on to the next step in the recipe.

“The hardest bit was finding a way to identify the ingredients,” says BCMS honours student Jordan Schwab. “We thought we’d use RFID tags – the ones used as store security tags, but groceries don’t have these tags so then we thought of using barcodes and got hold of an old library card scanner to read them.”

The students say ideally you need a system that automatically ‘reads’ the ingredients so you don’t have to physically scan them. But that’s a development for further down the track. For now, they’re happy with their three-item recipe collection -- Bloody Mary with a skip step for teetotallers, spaghetti bolognaise and the mysteriously-named Mexican mince.

“All the students were really creative with their thinking,” says Dr Hinze. “Some of the other systems they built included two mobile guides for students so they can find the lecture they’re supposed to be at, a plastic rabbit that recognises you when you come through the door and can read out all your Facebook and Twitter messages, and software to identify active kiwi nesting sites.”