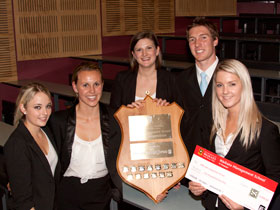 The South Island’s leading ski-fields should think about offering more than snowboarding and skiing. That’s according to a winning group of Waikato University Management School students who presented a strategy for growth for NZSki at their strategic management case competition last night.

“We recommended implementation through three stages - inspire, intensify and ignite,” says the team’s sole male Ryan Henderson. “Overall, our strategy was to enhance the experience that customers have on The Remarkables, Coronet and Mt Hutt by leveraging new adventure activities, including “skywire” – a high speed adrenaline flying fox.”

Henderson, a third year management student was joined by Hannah Croad, Susanne Lorenz, Megan Scott and Chelsea Shine. They lost count of the hours they spent working on their case, which included improving the infrastructure like roading and services on the mountains and a marketing campaign to run in conjunction with next year’s Rugby World Cup. They were competing against three other teams whose strategies had been chosen from a possible 25.

NZSki CEO James Coddington had told the students before they began working on the case that the fields had been building momentum over the last few years, they had room to keep expanding but didn’t want to reduce the customer experience. “We need to review our plans for the short and long-term to make sure we can take best advantage of the opportunities that lie before us. I can’t wait to hear what those brilliant students think.”

“I don’t know if NZSki will take any of our ideas on board,” says Ryan Henderson, “but for us it was a good experience working on a real strategy and then presenting to a huge audience without notes. You really had to know your stuff and have confidence in what you were talking about.”

The four strategies were judged 50:50 on a comprehensive report as well as a 10 minute presentation followed by questions. The event is held each semester and was sponsored by PricewaterhouseCoopers. The judges were Mark McCabe of PricewaterhouseCoopers, René Prichard of Madison Recruitment Ltd and Claire Gray of Streetworks who praised the excellence of the content and presentation of all four teams.