Sword of honour for Waikato graduate

Waikato Management School graduate Emma Burtenshaw has emerged with flying colours from both her degree studies and her junior naval officer training.

Burtenshaw received the prestigious Ministry of Defence Sword of Honour from the Minister of Defence Wayne Mapp at the conclusion of her naval training last month. The highest honour, the award is made only to an exemplary candidate in recognition of excellence and distinguished performance as a midshipman. 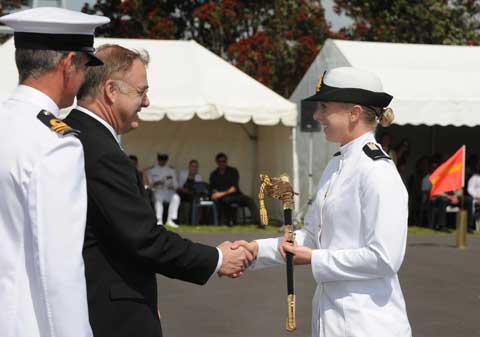 SWORD OF HONOUR: Waikato graduate Emma Burtenshaw is presented with the Ministry of Defence Sword of Honour by Defence Minister Wayne Mapp.

“The most special award to me was the common training cup because the winner was nominated by all the course participants, so that meant they all thought I’d done a good job,” says Burtenshaw, who graduated from Waikato University in October with a first-class honours degree.

Burtenshaw went from university straight into naval training in July. “The first ten weeks were pretty much boot camp,” she says. “The second part focussed on leadership training for officers. Because I’d come out of uni, the academic side wasn’t too difficult for me so I could focus on the physical side, which I wasn’t so used to!”

During the basic training, Burtenshaw learned how to handle weapons, deal with teargas and practise firefighting skills, as well as leading a group in tackling scenario-based situations. “It was full on,” she says. “But it definitely helped having been to uni, I had study skills and knew how to do my own washing and get myself to the right place on time.”

Burtenshaw’s Bachelor of Management Studies honours degree, where she majored in Marketing and Strategic Management, also helped. “Everything I’d studied applied in leadership training; it was just a matter of transferring it to a military context. And you have to do heaps of speeches, so my experience in doing case competitions was really valuable in giving me confidence.”

As part of her degree, Burtenshaw completed a practical investigation looking at the Navy’s ability to recruit tertiary students. “I’d always wanted to join the Navy, so I signed up while I was at university,” she says. “I ended up getting a free degree and a job at the end of it. I think if more people knew about the Navy’s tertiary schemes, more people would want to do it. Not having a student loan to worry about is awesome!”

Burtenshaw has a few more months of training before she’s assigned to a ship as a Supply Officer. “You only ever do 18 months in one job,” she says. “That was one of the things that drew me to the Navy. I absolutely love it, and I’ve got heaps to look forward to.”