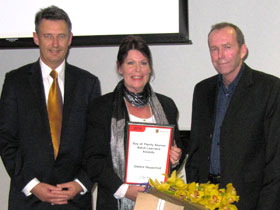 The Alumni award is presented annually to one University of Waikato mature student who studies at the Tauranga campus. Recipients receive $1000.

Deirdre Hauschild, now 63, is studying part-time towards a Bachelor of Social Science in Tauranga, majoring in psychology. She plans to put the scholarship money towards her next lot of tuition fees, including a summer paper during the Christmas holidays.

“It will definitely help with my ongoing study. I’m about half-way through my degree and I hope to finish by the end of 2012 so it’s fantastic to get the extra financial assistance,” says Hauschild.

Hauschild was “excited and determined to get a degree” when she began her first paper in 2007. Previously she was unable to take on university study as she had been the primary carer for her husband who suffered severe brain damage following an accident 19 years ago. When his conditioned worsened, prompting transfer to a permanent care facility, she decided the time was right to embark on her studies.

Her husband died recently but Hauschild’s determination to complete her degree is unshakable.

“I absolutely love the learning and the challenge. I enjoy coming onto campus every day and mixing with other people who all have similar goals and drive. My goal is to complete my degree by the time I’m 65.”

Despite coming late to university study, Hauschild says she has plenty of years left to offer her skills and experiences to the community.

“I want to work with people in the community again, and in the future to be part of a team on an overseas mission to a country in need,” says Hauschild.

“Doing the study has taught me a lot about understanding people and behaviour, how we think and why we do the things we do. With more knowledge I feel I would have the confidence and be better equipped to go out and help people in the community and hopefully make a difference,” she says.

The BOP Alumni Adult Learner Award was first presented in 2004. Students are recognised for their enthusiasm and determination to complete their studies, and their willingness to share skills and knowledge with others and support fellow students.