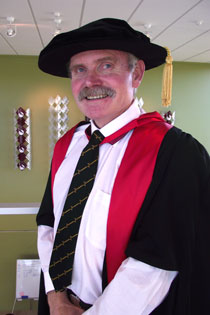 Dr Peter Stanley: Received his PhD recently from the Auckland University of Technology.

Research by a University of Waikato senior lecturer has shown that resilience in life is closely connected to the quality of relationships in a child’s developing years.

Peter Stanley, a senior lecturer at the University of Waikato’s Tauranga campus, received his PhD recently at the Auckland University of Technology graduation ceremony. Dr Stanley works in the Department of Human Development and Counselling, which is part of Waikato University’s Faculty of Education.

His thesis looked at the role of risk and protective factors in the lives of young people over time and how these factors help to develop resilience in a person.

“Resilience can be described as our capacity to endure difficulties, or our ability to bounce back from adversity,” says Dr Stanley.

“All of us are resilient in distinct ways, to varying extents, in contrasting situations, and at different periods of our lives. Studies into resilience provide special insights and understanding about how people become well adjusted and competent,” he says.

In an earlier study in 1998, Dr Stanley assessed 12 Wellington students aged 11-12 who were identified by primary schools as being at risk of negative life outcomes. The purpose of this study was to write a guide for teachers to identify young people who were at risk of substance abuse or other problems.

Ten years later, for his PhD study, he revisited the students, now 21-22, to discover to what extent risk and protection factors had influenced their lives and whether they considered that they were personally resilient.

“The results of the study were fascinating and show that the environment in which a child is raised is key to the sort of person they become in later life,” says Dr Stanley.

“The central idea is that a person’s resilience in life is determined by the nature and quality of their relationships within and across different developmental settings. This means that it is really helpful to development to have connections across family, school, friends, neighbourhood and community.

“One of the stories, for example, tells of a young man who was placed in foster care at aged 12. From a really difficult early environment, he was welcomed into a large, extended family committed to his care, in a wholly protective environment. Today this young man is doing extremely well for himself in every sense and has a degree of maturity you typically wouldn’t encounter in a young person.”

Dr Stanley says in his findings that positive interpersonal relationships have a huge influence on how an individual functions and how they are able to regulate their emotions. “If they’ve had positive relationships earlier in life, these capacities can translate into goal seeking and other constructive actions.”

He says while social services are very important in our society, they can be transient and substitutory influences and do not replace a lifetime of loving relationships from family and friends.