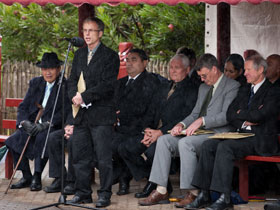 A river runs through it: Waikato University's Dr Kevin Collier speaking at Tūrangawaewae Marae for the launch of the book The Waters of the Waikato. Seated behind him from left is Professor Pou Temara, Rama Ormsby (Environment Waikato), Gordon Blake (Guardians Establishment Committee), Professor Bruce Clarkson and Clive Howard-Williams (NIWA).

Prime Minister John Key, the Māori King Tuheitia and Ngāti Tuwharetoa Paramount Chief Tumu Te Heuheu were among the high-profile guests at the launch of The Waters of the Waikato – a new book that focuses on issues relating to New Zealand’s longest river.

The book was launched at Tūrangawaewae Marae during King Tuheitia's coronation celebrations. It’s been edited by Dr Kevin Collier and Professor David Hamilton from Waikato University, W N (Bill) Vant from Environment Waikato and Clive Howard-Williams from NIWA. In all, 48 researchers – most working in the field of land and water management - contributed to the 15 chapters.

It’s intended as a resource for people who use and manage the river, and covers issues of water quality, sediment levels, wetland and lake protection, pest and native fish, and plant, invertebrate and bird life.

The new book follows on from similar publication done in 1971 and 1981. “We were overdue to update our evolving understanding of the river” says Prof Hamilton. The new book will help us understand the current state of the river, its ecosystems and the impact that humans and their activities have had on its ecology over the years.

“We want people to understand the ecological significance of the river and provide a background on the inter-related cultural, environmental and management issues.”

He says the challenge is to restore and maintain water quality in the Waikato and its inter-connected tributaries, lakes and wetlands and at the same time enhance the river’s ecosystem services to maintain its key role in the economy of the Waikato.

Dr Collier says the review has highlighted several issues in addition to water quality. “These include the effects of pest species such as koi carp, grey willow and aquatic weeds and how man-made structures, such as road culverts and floodgates can affect the movement and breeding of native fish that use the river.”

The Waters of the Waikato has been published by Waikato University’s Centre for Biodiversity and Ecology Research and Environment Waikato, with input from NIWA and 13 other organisations. It will provide a valuable context for a new initiative in “large river research” by the University of Waikato, involving a series of postgraduate student and postdoctoral studies on the Waikato River.