Two University of Waikato alumni are among the four winners of the prestigious William Georgetti Scholarships, awarded each year for postgraduate study in a field that will benefit the social, cultural and economic development of New Zealand. 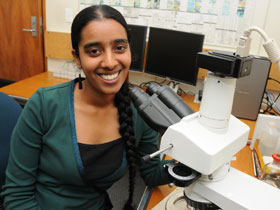 Tehnuka Ilanko, who’s just completed an honours degree in earth sciences, will receive $108,000 over three years for doctoral studies in volcanology at Cambridge University. She’ll be working with Dr Clive Oppenheimer, coordinator of the Cambridge Volcanology Group, on a study of the active lava lake on Mt Erebus in Antarctica.

“I wanted to work with Dr Oppenheimer because he’s done a lot to increase public awareness and education about volcanoes, and that matters to us here in New Zealand,” says Ilanko, whose interest was sparked in the subject while she was a student at Burnside High School in Christchurch.

The researchers will use remote sensing techniques to gather data from the lava lake for analysis, and then use experimental and numerical modelling to gain insights into the processes taking place beneath active volcanoes. 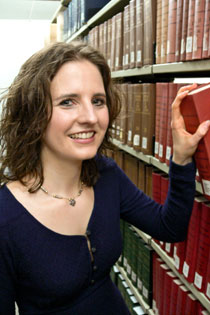 Rebecca Rose: Plans to complete a one-year masters degree in either the UK or United States.

Rebecca Rose, who graduated from Waikato with a conjoint Bachelor of Management Studies (Economics) and LLB (Hons) degree, has been awarded up to $45,000 to do a one-year masters degree in law. She has yet to decide where she will study, but is considering Cambridge and Oxford in the UK and Harvard, NYU and Chicago in the US.

She plans to study how economic analysis can be applied to law to make legal rules, policies and institutions more efficient without significantly compromising recognised justice and equality aims.

“In court you see how legislation and its underlying policy structures relationships and influences the way people behave,” she says. “But whether people behave in a way that’s economically efficient is another matter. If you can change the incentives for people to act in particular ways, then you can potentially change social outcomes – and perhaps that way we can move New Zealand up the OECD rankings.”

Rose says economic analysis often plays a big role in litigation in the United States and the United Kingdom, but is much less frequently relied on by New Zealand courts.

The former Fairfield College student has spent the last two and a half years in Wellington working at the Supreme Court as clerk to the Rt Hon Justice Blanchard and most recently at the Crown Law Office as intern to the Solicitor-General, Dr David Collins QC.

The William Georgetti Scholarships are managed by Public Trust and administered by the New Zealand Vice-Chancellors’ Committee. Four awards totalling $318,000 were made this year.