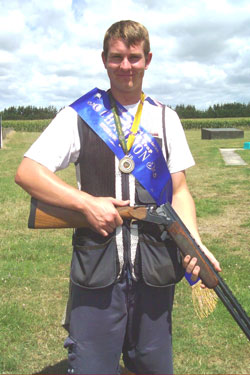 He recently returned from the Australian national championships in Brisbane having beating 139 others, mostly Australians, for the gold medal in the men’s trap event. The 21-year-old held off shooters from Australia, New Zealand Scotland, England, Isle of Mann, Canada and Fiji, including the double Olympic gold medallist Michael Diamond.

Back home to compete at the New Zealand ISSF Nationals in Hamilton, Browne-Cole has already qualified for the Commonwealth Games being held in New Delhi in October and is the top qualifier for the team to represent New Zealand at the world ISSF championships in Germany in July. Browne-Cole was highest overall at the North Island champs held at Waikato last week and placed second in the national champs.

ISSF stands for International Shooting Sports Federation. The ISSF Trap targets get thrown further, faster and at greater angles than the more common straight down the line shooting. “Like golf, shooting’s a mentally challenging sport which requires the shooter to be level-headed, mentally tough and having staying power.”

For the last four years Browne-Cole has been studying for a Bachelor of Science (Technology) degree at Waikato majoring in earth science. “I picked up a Hillary Scholarship at the start of my second year at university and that covered my course fees, making life a lot easier. Luckily my lecturers have been pretty understanding about rearranging exams and giving me extensions when I’ve been away competing. Oceania champs usually clash with B Semester exams.”

At the moment Browne-Cole is completing the practical part of his degree, which has required him to move to Palmerston North for nine months where he’s working at AgResearch’s Grasslands division. “They don’t have the good shooting facilities down there, so I’ve been doing a lot of commuting. Waikato has the best ground in the country, so I really like to get back here to keep in form.”

Browne-Cole began competitive shooting while at Waiuku College. His father was a duck shooter and he was used to having guns around and in 2003 he and his brother started the college’s clay target shooting team which went on to win the secondary school nationals the following year. “It was a good environment to learn good gun control, handling and safety, and I’ve carried on.”

He isn’t sure if he’ll stay on at university to complete a masters; he’s giving it some thought but it may be that for much of this year he’ll be off shore representing New Zealand.