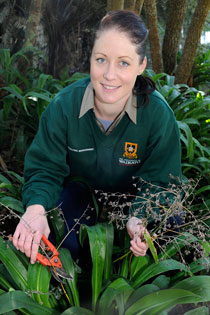 The 26-year-old put her skills and knowledge to the test in the event which took place at the Hamilton Gardens in August. The event national was run by the New Zealand Recreation Association and was created to generate interest and inspire other young horticulturist in the industry.

Contestants had to participate in 10 half-hour tasks and five 10-minute tasks which included using machinery, plant identification, and seed sowing and seed container making. Contestants also had to produce a power point presentation and give a speech on a particular topic.

“The most challenging task for me was the office management where we had to create spreadsheets and budgets, but luckily I have done it before,” Miss Harrison says.

Miss Harrison has been working at the university for two years and started her horticulture career in 2001 at the age of 16. “I did horticulture at school as a chosen subject. Then an apprenticeship came up through the Hamilton City Council and I took it. Horticulture is just something that runs through my family. My mother is a gardener and my grandmother used to propagate.”

However, horticulture is still an odd term for some. “Sometimes if someone asks me what I do and I answer ‘Horticulturist’ they’re like ‘um...’ so I just say I’m a gardener and then they know what I’m talking about.”

Miss Harrison says competitions such as the Young Amenity Horticulturist of the Year are important because they encourage more participation in the industry. “I think there needs to be more of a push for people to do Horticulture. I also think that it’s important for businesses related to the industry to encourage their employees to take part in these competitions.”

Her passion for the industry is fuelled by the reward of watching plants she has planted or propagated flourish. Her favourite plant is the Alectryon Excelsus, the titoki tree. “I just love it because they have beautiful red berries and glossy leaves, and I love native plants.”

Miss Harrison is now studying and brushing up on her skills ahead of the National Young Horticulturist of the Year contest in November organised by the Royal NZ Institute of Horticulture Education Trust. At least eight other contestants are expected to participate.

Although Miss Harrison loves working in the university gardens around the Academy of Performing Arts and the lake, she does not have a garden at home. “Everybody asks about my garden at home,” she laughs, “but I don’t actually have one. I suppose you wouldn’t want to bring your working life home with you.”