Using cyberbuzz to bring the tourists 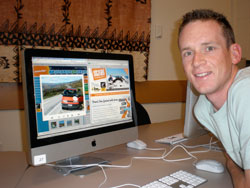 Everyone’s heard of the ‘Best Job In The World’ viral marketing campaign by Tourism Queensland, which last year put out a worldwide call for applicants to spend six months as ‘caretaker’ on pristine Hamilton Island on the Great Barrier Reef.

The competition attracted 34,000 applicants from more than 200 countries, and it’s estimated it generated US$200m of global publicity.

“It shows the power of these new forms of communication to get people interested in visiting a place,” says University of Waikato tourism researcher Hamish Jenkin.

“Here, Tourism New Zealand is investing in campaigns like Go All the Way, which focuses on targeting backpackers through Facebook, Twitter, Bebo and My Space. These networks are a great way to get people interested in New Zealand and hopefully visit in the future.”

Jenkin has been awarded a $15,000 tourism research scholarship for his Masters project looking at the impact of social networking mediums on the decision-making process of tourists.

The scholarship is one of five government-funded awards designed to build research capacity in tourism, increase research applicable to the industry, increase the profile of tourism research, and create stronger links between researchers, industry and the public sector.

“This is a really important topic for tourism organisations in New Zealand as people are increasingly using social networking for decision-making,” Jenkin says.

His research will focus on backpacker transport in New Zealand, in particular Stray backpacker buses and Spaceship New Zealand’s campervan rentals. He’s currently conducting a survey of customers who book online with these companies, and he’s also monitoring customer feedback on the company websites, Facebook and Twitter.

Using cyberbuzz to bring the tourists is licensed under a Creative Commons Attribution 4.0 International License.