It was an emotional return for Tonga’s Solicitor-General and Waikato University alumnus Mr Aminiasi Kefu, as he reminisced of his days as a law student during an official visit to the University on April 12.

Part of a week-long visit to New Zealand, Mr Kefu and a delegation of representatives from the New Zealand Government, visited the Faculty of Law where he met with staff and students, and delivered a public lecture on recent developments on Tonga’s Constitutional and Electoral Reforms.

Recently appointed by Prime Minister John Key as the New Zealand Prime Minister’s Fellow for Tonga, Mr Kefu graduated from Waikato University with a Bachelor of Laws in 1997. He spoke fondly of his time at Waikato and was extremely thankful for the opportunity to return to campus.

“It’s a great pleasure for me to be here. Apologies for being so emotional but I have very warm feelings for this place. This is where it all started for me, here at Waikato, and it is a great honour and privilege to be able to come back again,” said Mr Kefu, who also holds a LLM from Victoria University in Wellington, and a graduate diploma in Public Sector Management.

“I am looking forward to building the relationship between Tonga and Waikato University. As someone who studied here, it is my desire to see more of our people study at institutes such as this and to provide them with the opportunities to do so.”

“This is an opportunity for the university to foster and assist in meeting the needs of Tonga’s future legal professionals. As exemplified by Mr Kefu, we are certainly proud of his achievements and remain committed to providing students from Tonga with the necessary tools to successfully achieve their own dreams in the field of law,” said Professor Morse.

The Prime Minister's Fellowship was established in 2008 as a coronation gift to King George Tupou V. It aims to develop leadership and encourage personal friendships between New Zealand and Tonga. 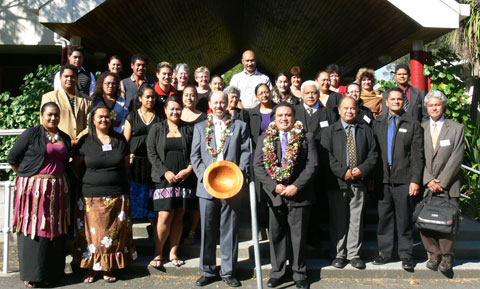