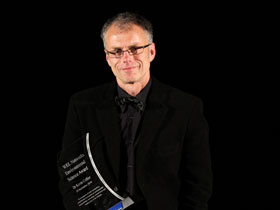 Two Waikato University academics have been acknowledged at the latest Kudos Awards, held to celebrate scientific achievement in the Waikato.

Dr Collier, who shares his time between the University and Environment Waikato, has been researching river management and restoration for 25 years, particularly rivers and streams in the Waikato. He is a senior editor of the recently released book The Waters of The Waikato - a resource for people who use and manage the river that covers issues of water quality, sediment levels, wetland and lake protection, pest and native fish, and plant, invertebrate and bird life.

“Big rivers are a challenge to study,” says Dr Collier, “but with advances in technology, with sonor applications and remote sensing, there’s a renewed focus internationally. So it’s a good time to be researching river ecology.”

At community level Dr Collier has had active involvement with groups and councils to improve urban stream health, he co-founded the Mangakotukutuku Stream Care Group and developed the www.streamcare.org.nz with Hamilton City.

Dr Carolyn King studied weasels at Oxford University for her doctorate and came to New Zealand originally to work for the DSIR’s ecology division. “I started by getting rangers in all the National Parks to collect and freeze all their dead stoats. Then twice a year I’d drive around New Zealand talking to them about the results and encouraging them to continue.”

With her colleagues, she was able to prove the link between occasional big seed falls in South Island beech forests and the increased numbers of mice, stoats and other small mammals, and the subsequent threat to bird life. “We could monitor numbers as they changed and then pin down the reasons. DoC can now know six months from seed fall when the forests are going to be overrun with stoats and mice in summer, and can put measures in place to protect the birds.”

She applied the same techniques in Pureora Forest Park in the North Island where kokako were threatened. “There, rats are much more common than stoats, and threaten the birds every year.” 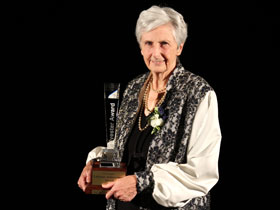 Alongside her study, Dr King has been a writer and editor for science publications and journals. She wroteImmigrant Killers (about introduced predators), The Natural History of Weasels and Stoats, and edited The Handbook of New Zealand Mammals.

She was also an editor for The Royal Society of New Zealand for 27 years, in charge of their journal form 1983 to 2001 and the NZ Journal of Zoology 1991-2009. Dr King hopes to be teaching for a while yet. While she’s thrilled to receive her Kudos lifetime award for her career achievements and major contributions to science relevant to the Waikato region and the international profile of New Zealand, she’s also quick to point out that research is never done alone, that she’s really collecting the award for the teams she’s worked with. “I’m just one in the crowd.”