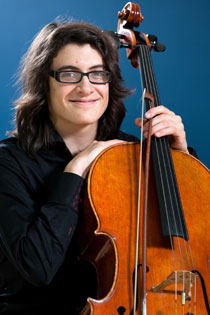 Santiago Canon-Valencia: Has performed extensively since he was 12.

Two Waikato University cellists have been selected for a major international music competition in Beijing.

Twenty-year-old Edward King and 15-year-old Santiago Canon-Valencia are the only two from southern hemisphere music schools to be selected among the 44 cellists competing at the Beijing International Music Competition in October.

Both the students are Sir Edmund Hillary Scholars and part of Waikato University’s soloists’ programme where, to be eligible, students must have won or gained a placing in a major New Zealand or international competition and need to have played a concerto with a professional orchestra.

Santiago Canon-Valencia from Colombia has performed extensively since he was 12, and Aucklander Edward King won first prize at the New Zealand National Concerto Competition in Christchurch earlier this year. He has recently returned from touring the UK as part of the Leonari Trio after winning the Pettman/Royal Overseas Chamber Music Competition.

“If you look at the musicians going to the Beijing competition, you have to say having two Waikato cellists featuring is a remarkable achievement,” says their teacher James Tennant. “These two young men come from completely different backgrounds but are alike in their drive and ambition. They want to be international soloists and will do whatever it takes to get there.”

To be selected for Beijing they each had to submit a 20 minute unedited recording of their playing. Once at the competition they will have to play a range of works as they compete to make it through the early rounds. Their accompanist Katherine Austin will be going with them and even if they do not make the final, they will stay for the duration so they can attend master classes. The University, with assistance from the Sir Edmund Hillary Scholarship programme for high achievers, is providing financial support for the trip.

“It’s not just a matter of competing,” says Tennant, “it’s also about learning from the experience.” 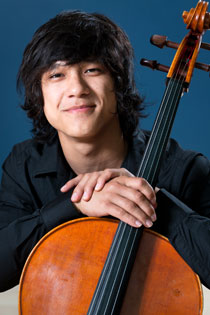 Canon-Valencia, who is in the first year of a Bachelor of Music, says he likes competitions. “Yes they are stressful, but they are also fun. You want to do your best to succeed so you push yourself to the limit. The work you have to do before it isn’t always fun, but it’s all worth it.”

Honours student Eddy King says he’s practising about five hours a day at the moment. “I’ve met a few of the other cellists who’ll be in Beijing. Technically they are superb, very skilful, but I think what makes us a little different is that we’re taught to have more freedom when we play, we can take a more individual approach to our playing.”

They know the six-day Beijing competition will be tough and tiring. In the first round they have to play three movements from a Bach suite and a 20th century solo sonata. In the second round they have to play a complete sonata for cello and piano, a Chinese composition and a modern work.  If they make the final round they must play a full concerto from memory.