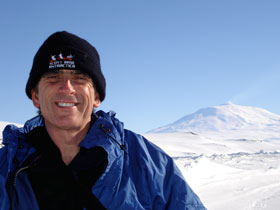 Professor Craig Cary: Will head to Chile with Associate Professor Brendan Hicks to develop a program for the Chilean Government aimed at preventing didymo.

Waikato University didymo experts are going to Chile where the first outbreaks of the microscopic pest have recently been reported in South America.

Professor Craig Cary and Associate Professor Brendan Hicks from the Department of Biological Science have been contacted by the Chilean Government to help develop a program to educate biosecurity officials and train field workers on the detection, monitoring and prevention of didymo.

When didymo was first detected in New Zealand’s South Island in 2004, Professor Cary developed a highly sensitive DNA-based tool that could detect didymo at concentrations as low as one cell in a litre. This tool is primarily used in surveillance efforts before didymo arrives.

He says if we can detect didymo very early in the invasion, we have a much better chance to mitigate and curtail the spread to other waterways. The DNA method uses DNA technologies often used in criminal forensics that detects a gene specific only to didymo.

“That’s like looking for a needle in a haystack of DNA – the amplification method we use is a very sensitive didymo magnite that can not only find those needles we are looking for but tell us how many there are.

“And the ongoing campaigns, such as Check, Clean and Dry, have maintained public awareness about the need to be careful and vigilant.”

Cary and Hick’s are constantly receiving and testing thousands of water samples from all over the North Island as part of a multi-organisational effort to restrict its spread.

“And along with Biosecurity, Fish and Game, NIWA and local councils there’s a whole series of procedures we’d follow should we find new evidence of didymo in the North Island.”

The freshwater diatom, sometimes called rock snot, can exist in waterways for a long time without being visible to the naked eye and the scientists need to detect it before it blooms.

Professor Cary says the genetic surveillance they’ve developed is so sensitive that collections have to be taken with extreme care. “We’ve developed self-contained sampling kits that can go all over the world. While we’re in Chile we’ll be running workshops that cover the protocols for sampling, detection, surveillance and prevention using the New Zealand experience that has proven so successful to date.”