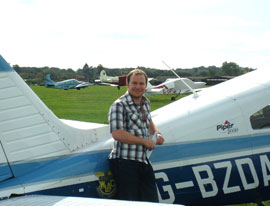 Commissioning artworks and helping a charity at the same time might not be the first thing to spring to mind when you’re looking at ways to promote SQL databases, but it’s ideas like these that have put Waikato University graduate Matt Lambert at the top of his profession.

Lambert, who’s just 28, has become the first New Zealander to be listed as one of the most promising young PR professionals in the UK. He is one of 29 PR stars under the age of 29 named by industry magazine PR Week in its annual rankings for 2010 – quite an achievement for the Whangarei man who initially set out to be an airforce pilot.

“With the 29 under 29 you’re up against some of the best brains in the business,” says Lambert. “They look for people doing the most adventurous things in PR, someone who’s taken the communications industry by the scruff of the neck and flipped it on its head.”

Lambert is currently head of technology and innovation at PR firm Bite Communications in London, one of the world’s PR nerve centres.

As well as bringing a bit of Kiwi expertise to the company (he regularly fires up the barbie for his colleagues – even in the snow), he handles top global technology clients such as Microsoft, HP and Fujitsu, and relishes the challenge of making even the driest technical subjects exciting.

He masterminded Bite’s PR campaign to promote SQL databases by creating an art exhibition in a London gallery.

“Most people see SQL databases as mundane, dull things, but we reckoned being the architect of an IT system takes a bit of creativity and we wondered what would happen if you put that on canvas.”

To find out, the agency teamed up with students at St Martin’s College, one of London’s top art schools.

“Their challenge was to convert IT system designs into works of art for a competition,” explains Lambert. “We held an exhibition in a Soho gallery, and the system design behind the winning artwork went to a charity of the company’s choice.”

Lambert decided to make the switch into PR from science and maths in his final year at Kamo High School.

“I decided the military wasn’t for me and wanted a career where I could see the world,” he says. “I fell in love with the Waikato Bachelor of Communications course, and the rest is history!”

He says the exciting thing about PR is that it encourages you to think outside the box. “In PR you can use strategy and thinking while letting your creative side loose. There’s no other career where you can do that.”