Waikato honorary doctorate for the boy who ran away to sea 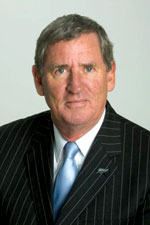 Seasoned Mariner: Former CEO of Port of Tauranga Ltd and Chair of New Zealand Trade and Enterprise Jon Mayson is to receive an honorary doctorate from Waikato University.

A seasoned mariner and inspiring business leader is to receive the University of Waikato’s highest honour.

Jon Mayson CNZM, former CEO of Port of Tauranga Ltd and Chair of New Zealand Trade and Enterprise, will be awarded an Honorary Doctorate in Tauranga on September 14.

“The honour is in recognition of Jon’s substantial contributions to the development of the Port of Tauranga and the wider business and arts communities, and his unwavering belief in the potential of people to achieve great things,” says University of Waikato Vice-Chancellor Professor Roy Crawford, who will present the award at a black-tie dinner at the Sebel, Trinity Wharf.

“Through his work at the Port of Tauranga and elsewhere, Jon has displayed a tireless commitment to social justice and business innovation, and an inclusive leadership style.”

Jon Mayson went to sea at the age of 16, against his parents’ wishes. He spent almost 26 years afloat, first in the Merchant Navy, where he qualified as a master mariner, and then as Tugmaster and Pilot in the Port of Tauranga. Moving into operational management roles at the Port, he was ultimately appointed to the position of Chief Executive in 1997.

Under his leadership, the Port of Tauranga grew to be New Zealand’s largest export port, and established its MetroPort operation in Auckland, the country’s first inland port. It was an early adopter of ‘triple bottom line’ reporting – demonstrating the company’s social, environmental and economic sustainability – and a member of the New Zealand Business Council for Sustainable Development.

A strong believer in empowering people to achieve their full potential, Mr Mayson ensured that every Port of Tauranga business card carried a quotation from George Bernard Shaw: “Some men see things as they are and say ‘Why?’: I dream of things that never were and say ‘Why not?’.”

Mr Mayson was honoured for his services to the shipping industry and to the export sector in 2006 when he was made a Companion of the New Zealand Order of Merit (CNZM).

A past president of Export New Zealand, he currently chairs the boards of New Zealand Trade and Enterprise, TKC Holdings Ltd, C3 Ltd, Ziwipeak Ltd, Trevelyan Pack and Cool Ltd and Legacy Funerals Ltd. He is a member of the Institute of Directors and an NZIM Fellow.

Outside the business sphere, Mr Mayson has been actively involved in supporting the arts in Tauranga as one of the sponsors of the Tauranga Art Gallery, and as Chairman of the Tauranga Arts Festival Trust and of the Museum Steering Group. He was also behind the successful bid for Tauranga to host the “Around Alone” single-handed round-the-world yacht race in 2003.

Professor Crawford says the University of Waikato is also a firm supporter of Tauranga and the wider Bay of Plenty region. A partnership between the university and Bay of Plenty Polytechnic means they are continually working together to increase tertiary education opportunities for the region.

Waikato honorary doctorate for the boy who ran away to sea is licensed under a Creative Commons Attribution 4.0 International License.