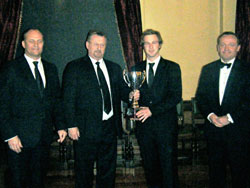 Two Waikato University law students are to represent New Zealand at the World Negotiation Championships in Copenhagen next year.

Ben Gilbert and Andy Cameron of Waikato’s Te Piringa Faculty of Law were winners of the National Negotiation Championships, held last week in Dunedin as part of the New Zealand Law Students Conference. They beat a team from Victoria University of Wellington in the finals to qualify for the international competition.

The annual Law Students Conference includes competitions for negotiation, client interviewing, witness examination and mooting, each sponsored by a major law firm. Competing teams from each university law faculty are judged by legal academics and legal practitioners; the winners go on to compete internationally.

A former St Paul’s Collegiate student, Gilbert is in his fourth year of a double honours degree in law and management, and is currently president of the Waikato Law Students Association. Cameron is three years into his law degree as a mature student.

Gilbert says he was a late shoo-in for the Waikato negotiation team after a family bereavement forced Cameron’s original partner to pull out just before the Australasian law student competitions in April.

“I first met Andy on the plane to Australia earlier this year,” he says. “But we managed to reach the finals there, despite competing against 31 universities from New Zealand, Australia and Singapore.”

Since then the two students have put in lots of hard work, culminating in last week’s win at the national competition, sponsored by top law firm Buddle Findlay.

Gilbert says the competitions offer a chance to represent your university – and are good for your CV. “The major law firms have an eye on who competes at a high level,” he says. “And it’s a great way to network because you’re meeting best and brightest from each university, as well as judges and practitioners in the corporate field.”

The two students are now looking forward to stepping up their efforts to prepare for the international competition in Copenhagen.