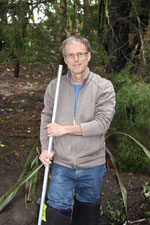 Dr Kevin Collier, who shares his time between the university and Environment Waikato, has been researching river management and restoration for 25 years, particularly rivers and streams in the Waikato. He’s a finalist in the environmental science category.

During the last ten years, Dr Collier’s research has included studies into land use effects on stream health, management approaches on threatened species, the development of indicators for stream and river monitoring and the ecology of large rivers. Dr Collier was also senior editor of the recently published book The Waters of the Waikato: ecology of New Zealand’s longest river.

“Big rivers aren’t easy to study, but with the new co-management arrangements, increased interest in restoration and the advancement of technology, it’s a good time to be studying the Waikato,” says Dr Collier. “Research shows us how the river functions and gives us the information we need to evaluate the best forms of restoration.”

At community level Dr Collier has had active involvement with groups and councils to improve urban stream health; he co-founded the Mangakotukutuku Stream Care Group and developed the website www.streamcare.org.nz.

Dr Marcus Wilson is a finalist in the science teacher/communicator category of the Kudos Awards. He comes from a family “loaded with scientists” but it was an enthusiastic teacher that directed him towards physics. And now, with similar enthusiasm, Dr Wilson is taking physics to the people.

He’s been teaching at Waikato University since 2004 and out of work hours he’s championing physics in a variety of ways. He’s active in Cafe Scientifique – community science gatherings in Hamilton and Tauranga, he has a blog called PhysicsStop, participates in physics podcasts and coaches secondary school students sitting scholarship physics.

He says people get it into their heads that physics is a hard subject, but by taking examples from everyday life it can be interesting, understandable and even fun. “It’s about bringing in the familiar. People understand rotational motion if you talk about a washing machine on its spin cycle drawing out water. I look out for things happening in the news – like energy and transport issues, and all the physics that goes on in day to day living we scarcely think about. Why, for instance is the ice on your car windscreen thicker than on the side windows? That gets you thinking about heat and energy.”

He got his third year electromagnetic class to calculate whether their cellphones would ring if they were put in water. He tested his own phone – wrapped in Gladwrap – and it did ring, but once salt was added to the water the ringing stopped. “You might conclude from that that signals from mobile phones are unlikely to penetrate any distance into users’ heads.”

The winners of the fourth annual Kudos Awards will be announced at a dinner on Wednesday September 23.