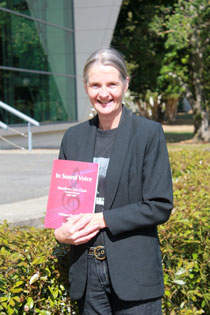 Music History: Waikato University masters student Phillippa Ulenberg with her book about the history of the Hamilton Civic Choir.

Waikato University masters student Phillippa Ulenberg has long been fascinated with musical history, and when she was approached by the Hamilton Civic Choir to write their history, she was certainly interested.

Almost three years later the book, In Sound Voice: Hamilton Civic Choir’s first sixty years 1946 – 2006, has beenpublished, and was launched at the University of Waikato in December. She was recommended to the Choir by her honours music degree supervisor, the University’s Associate Professor Martin Lodge.

"In Sound Voice will fascinate and surprise anyone who has an interest in New Zealand's cultural history, and Hamilton's in particular,” Ulenberg says. “The amount of musical activity here in the Waikato, the quality of it, and the many local people who became well regarded musicians in Australasia and beyond, were a delight to discover,” she says. Ulenberg has just completed her masters degree at the University of Waikato, and is about to embark on her PhD.

Ulenberg was passionate about playing the piano while at secondary school, but the opportunity to pursue music again came almost 30 years later, when she was asked to join a quartet that needed someone to sing tenor. “A short while later, a school music teacher put the Waikato Music degree handbook into my hands,” she says.

With no official records existing for the first two decades of the Hamilton Civic Choir, Ulenberg found the work of Waikato Times editor Arthur E Manning who was heavily involved in Hamilton’s cultural groups, and drew on his articles, reviews and reports on the arts in Hamilton. She talked to orchestral musicians who knew the Choir’s first conductor, Monsieur Peter de Rose, as well as choir members who have been singing with the Choir for more than 30 years.

“I found out about some quite extraordinary and highly colourful characters who had been involved in music in the Waikato, all of whom had much to do with starting the Civic Choir and Orchestra. The Choir didn’t simply appear out of nowhere in 1946; there’s so much more to the story than that, and it’s wonderful to be able to discover and share its history.”

The Choir was formed by the Hamilton City Council, which initiated the Civic Orchestra in addition to the Choir, and revived the Competitions and Operatic Societies.

Ulenberg has strong praise for Hamilton’s normally under-recognised arts culture. “I think we have every reason to be proud of our city for the extraordinary amount of world-class music and cultural activity produced.

“The University of Waikato, with its talented staff and students, makes an enormous contribution. However, the dance, theatre and music that is organised by other community groups is frequently of an excellent standard. Sometimes my friends and I look at the Art Diary and have trouble choosing from a number of great productions or concerts taking place in any one week.”

Ulenberg joined the Choir in 2008 after she began researching and writing their history. She was attracted by a Russian music concert the Choir was performing. She is now about to begin researching another New Zealand music project for her doctoral studies, The Impact of the Cambridge Music School (1946-1986) on New Zealand Music: in light of its history and context.