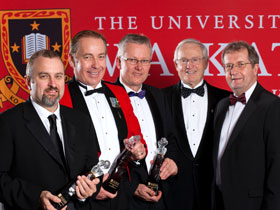 Waikato University honoured three of its top alumni at a glittering awards dinner in late August.

The annual Distinguished Alumni Awards were held on August 27, with more than 220 invited guests attending the black-tie, invitation-only dinner.

The three were each presented with a limited edition cast-glass figure created exclusively for the award.

The University of Waikato Distinguished Alumni Awards are presented to no more than three alumni each year. They recognise and celebrate Waikato University alumni who have made an outstanding contribution to their profession, to the community, to the arts or sport, or to more than one of these areas since graduation from Waikato University.