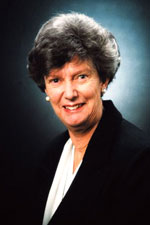 An international advocate for human rights and former New Zealand Human Rights Commissioner is to receive the University of Waikato’s highest honour. Professor Margaret Bedggood QSO will be awarded an Honorary Doctorate at the University’s graduation ceremony on May 6.

“The honour is in recognition of Professor Bedggood’s significant contribution to the theory and practice of human rights,” says University of Waikato Vice-Chancellor Roy Crawford, who will present the award.

“Through her work for Amnesty International, Margaret has helped shape the contemporary global understanding of international human rights, while here in New Zealand she is rightly known as an inspiring teacher and a tireless advocate for social justice.”

A respected academic and former Dean of Waikato University’s Faculty of Law, Professor Bedggood served as head of the Human Rights Commission between 1989 and1994. During that time, she oversaw the passage of the Human Rights Act, widely regarded as a landmark piece of legislation which has been of enormous importance to New Zealand’s constitutional democracy.

A lifelong member of Amnesty International, she was elected to Amnesty’s nine-member International Executive in 1999, a position she held until 2005. There she was instrumental in broadening the organisation’s focus to encompass social, economic and cultural rights.

Professor Bedggood has taught at the universities of Waikato, Otago, Victoria and Auckland. She continues to supervise PhD students as an honorary professor at the University of Waikato, and also teaches human rights law at Oxford University.

She was formerly Chair of The Human Rights Foundation, and is actively involved with the Aoteaora New Zealand Peace and Conflicts Studies Centre. She has served on the Film and Literature Review Board and on the Refugee Council, and has a long-standing interest in social justice issues within the Anglican Church as a member of the Third Order of the Society of Saint Francis.

Also to be awarded a University of Waikato honorary doctorate is Max Gibbs, a freshwater and coastal scientist with NIWA who has spent nearly 50 years studying New Zealand’s lakes, rivers and coastlines. Mr Gibbs, who is known internationally for his expertise in stable isotope techniques and analysis, will receive his honorary doctorate at a graduation ceremony on May 3.