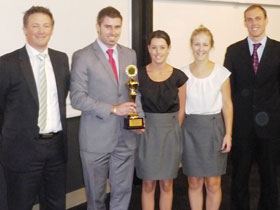 A student team from the University of Waikato has emerged the winner in the first round of the 2010 national business case league, New Zealand's premier university business case competition.

The competition, held at the University of Auckland Business School over the weekend, saw the Waikato team of four present their winning analysis of NZ Post to a judging panel including the CFO of NZ Post, Mark Yeoman. Second place went to the Canterbury University team, third place to Otago.

Mr Yeoman congratulated Waikato Management School students Daniel Stevenson, Deborah Versluys, Donna Frederikson and Jeremy Harwood on the professionalism of their presentation, the clarity of their strategies and the comprehensiveness of their approach.

Dr Stephen Bowden, coach of the Waikato team, said the team had worked hard to achieve their win. “Perfect practice makes perfect,” he said. “The efforts put in by the wider squad in intensive training really helped hone the strategic and presentation skills and led to a great performance.”

Assistant coach Josef de Jong said the Waikato teams were always well prepared. “In part it’s because we are really tough on the question-asking in practice. Get through one of those and the real judges don’t seem so bad.”

The competitors had five hours in lock-up mode to develop a business strategy for the case. They then made a 10-minute presentation to an audience and panel of judges.

The league continues in May when it will be hosted by the University of Canterbury. “We’ll make some changes to the competing team for Christchurch,” said Dr Bowden. “It’s all about rotation and making sure we keep our whole squad involved. Fortunately we have the depth at Waikato to do that and still contend.”

De Jong warned that the next competition is likely to be tougher. “The other teams are always copying the ideas we come up with. But we haven’t shown them everything just yet and we’re always innovating – so we should be fine.”

Six teams from Waikato, Auckland, AUT, Massey, Canterbury and Otago are competing in the four-round national business case league, which culminates in a week-long final with invited international universities in Queenstown in late August.