Waikato lets your fingers do the walking

The University of Waikato has become the first New Zealand university to put everything you need to know at your fingertips – thanks to a new web network that can be accessed through a mobile phone.

Launched to coincide with the start of summer school on January 5, the mobile web environment will allow mobile phone users to view a map of buildings on campus, check the University’s news and events calendar, access staff contact details and even locate a vacant computer work station on campus.

“It just takes a couple of clicks to access information for visitors, students and staff,” explains Dr Steve Leichtweis, the driving force behind the project. “Using your phone, you can access the University’s online phonebook to find a staff member, click through to phone or email that person, and then view a campus map to see where their office is.” 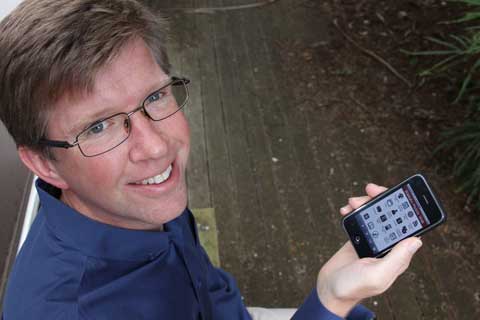 Dr Leichtweis, who is IT Manager in the School of Education, says the system is a great example of how the University is always looking to meet future needs. “What we’ve done is link in to an open source mobile framework made available by the Massachusetts Institute of Technology (MIT) in the United States. There are a handful of universities currently using the MIT system in the US, UK and Australia, but we’re the first in New Zealand to adopt this framework.”

The School of Education Computer Support Group started working on developing data modules and functionality for a Waikato version of the system in mid-November. “In less than four weeks, we had approval to go live,” says Dr Leichtweis. “It’s a testament to the simplicity and elegance of the MIT framework. The nice thing is that we don’t have to build a lot from scratch, and anything we create can be contributed back to the international mobile web development community.”

The system taps into the University of Waikato’s new-look website, and offers instant access to news updates, emergency information and also Google maps. Some phones (eg iPhones and the iPod Touch) will also allow users to access iTunes-U.

Dr Leichtweis says system works on any phone with a simple web browser and internet capability. “It’s all about opening up access to information currently available through a computer to your mobile phone,” he says. “We’re anticipating demand for this will grow. Kids are clamouring for the latest and greatest all the time, so pretty soon it won’t just be a minority of students with these smart phones, it will be the majority."

Dr Leichtweis will be tracking usage and identifying any glitches in the initial roll-out. “There’s a feedback button to help us make the system work for as many web browser capable phones as possible, and hopefully staff and students will highlight things they’d like to see on it in the future.”

The next step is to add in further functionality – Dr Leichtweis hopes to incorporate the full University lecture timetable, more library information and information about the Tauranga campus in time for the start of A Semester in March.

He’s also talking with Environment Waikato about ways to display bus timetable information for the routes serving the University campus. “And there’s an opportunity here for the Students Union to provide information throughout O Week when the new students arrive.”

For a preview of the system, visit http://m.waikato.ac.nz/