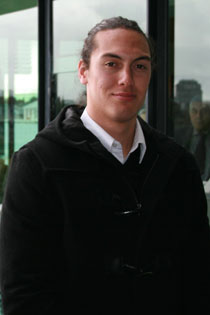 A former Wellington College student is one of two people to win a scholarship named after the late Māori Queen.

Tredegar Rangiatea Hall, 21, is one of two University of Waikato students who recently received a Dame Te Atairangikaahu Scholarship which is run by the university and funded by Environment Waikato.

The scholarship, worth up to $2000, was set up in 1991 to mark the 25th anniversary of the late Dame Te Atairangikaahu and to ensure the further education of Māori people. Māori studying full time at an undergraduate level in the resource management or environmental fields at the University of Waikato are eligible to apply.

Hall, who completed his secondary schooling at Wellington College, is of Tūwharetoa descent. He has always had an interest in Māori, geography and the environment, completing his Bachelor of Social Sciences last year. He is now completing an honours year and aspires to work for his people, hopefully with the Tūwharetoa Māori Trust Board, he says.

Aside from his study, he also finds time to play rugby for the University Premier team, perform for a university kapa haka team, is co-president of the Waikato Māori Students’ Association, is a student ambassador for the university and is a tutor and mentor for geography.

Hall was accepted by the Golden Key Society in 2009, which recognises academic achievement in the top 15 per cent of faculties at the University of Waikato.

He says prospective students should be assertive, study what interests them and take up as many opportunities as possible. “Step up, sharpen up, harden up”, he says. “Anything worth having never comes easy.”

Applications for the 2010/11 Environment Waikato Dame Te Atairangikaahu Scholarship will be accepted until 31 March 2011. For more information, visit http://www.waikato.ac.nz/research/scholarships.