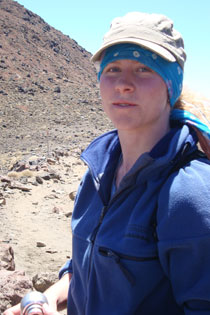 When the Tongariro Natural History Society wanted to find out more about the weta living around Lake Rotopounamu, they called on University of Waikato biology student Kristi Bennett to make sense of their data.

“Over the past five years, we’ve been using volunteers to check our dozen or so ‘weta motels’ around the lake every month so we’ve got all this information but don’t really know what to do with it,” says TNHS director Sarah Gibb.

“Then Kristi came along and we asked her to put some science behind the information.”

Bennett spent three months with TNHS over the summer as part of her Bachelor of Science (Technology) degree, majoring in biology. Waikato’s BSc (Tech) degree includes two compulsory work placements, organised by the Cooperative Education Unit in the Faculty of Science and Engineering, and Bennett was one of two biology students selected for the TNHS placement.

Most of her time was spent working with overseas volunteers baiting for rats, stoats and weasels around Lake Rotopounamu, and removing willow from wetland. It’s hard physical work, so when she was asked to advise on the weta project she jumped at the chance.

“Weta are New Zealand’s equivalent of mice, and have an important role as nocturnal scavengers,” says the former Fairfield College student. “But they’re vulnerable to predators such as rats and the destruction of their habitat, so it was awesome to look scientifically at this project and see the results. I aim to go into this kind of work, so it was a fantastic opportunity.”

Bennett found that the original project had just too many variables. The Lake Rotopounamu “weta motels” were made of different materials and had been set up randomly on different kinds of trees, which could have skewed the observations, and there was no systematic process for collecting observations.

In her report, she recommended that TNHS increase the number of “weta motels” and standardise the weta observation process so that all volunteers collected the same kind of information. She also suggested designating an area for rodent control in order to attract more weta, while setting up another control area to test the results.

“Thanks to Kristi’s recommendations, all future data we collect on weta populations will have more credibility,” says TNHS director Sarah Gibb. “We’ll get DOC to check it out the new system and approve it all, and we’ve said to Kristi, ‘When can you come back and do your Masters with us?’” 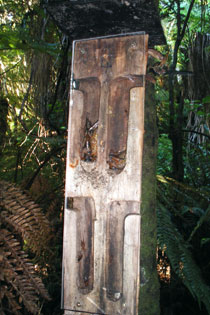 Open home: An example of a "weta motel".

Bennett is now in her third year at Waikato, and has one more work placement before she graduates. She says working at TNHS has been a valuable learning experience as a scientist. “It’s certainly reinforced my desire to continue along the path of ecology and biology, and I now have a much better idea of how to go about setting up a scientific study.”

She’s also come out of the placement a whole lot fitter -- and with a set of unusual new skills. “On top of ecological restoration skills, I’ve learned about helicopter safety, the best methods for searching for small, rare skinks, the ability to drive a number of different vehicles and the catching and tagging of blue ducks.”

The University’s Cooperative Education Unit organises more than 200 work placements each year for Waikato students studying for tech degrees in science and engineering. It’s developed excellent relationships with local and regional employers, many of whom go on to employ Waikato graduates.