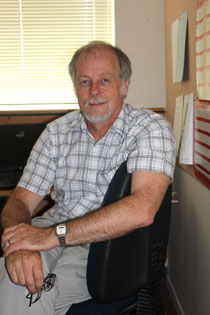 Dr Howell Round: Recipient of the Distinguished Service Award from the Australasian College of Physical Scientists and Engineers in Medicine (ACPSEM).

Hi-tech equipment in hospitals has to be in top working order all of the time and must be used correctly and safely. It’s the job of medical physicists to make sure this happens.

They’re a rare breed, but one of them, Dr Howell Round – a senior lecturer in Waikato University’s Faculty of Science and Engineering - has been acknowledged for the work he’s done in training people working in this specialist field, and for his work with the profession’s representative body.

Dr Round has been presented with a Distinguished Service Award by the Australasian College of Physical Scientists and Engineers in Medicine (ACPSEM). ACPSEM used to be an amateur organisation run by volunteers. Their first real office was the old morgue at Sydney’s Royal North Shore Hospital, but these days ACPESM owns premises in Sydney, employs eight staff, has a turnover of millions and continues to expand – thanks in a large part to Dr Round.

“About nine years ago I started developing a system called TEAP for the education, training and accreditation of medical physicists in clinical practice for Australasia. I wasn’t far into the project when I found out that a colleague, Dr John Drew, was doing the same thing in Australia. We worked blindingly fast and in a little more than six months had a programme up and running.”

The programme rolled out in New Zealand in 2003 at Canterbury University and in Australia the following year. Six universities are now accredited to do the initial training – mostly for physicists who oversee the installation and safe operation of machines used for treating cancer (radiation oncology), as well as in nuclear medicine and radiology. Many hospitals are now accredited to provide the clinical training part of TEAP.

“Australia has, and continues to pour a lot of money into the project,” says Dr Round. “There’s evidence that we’re moving into a cancer epidemic – because cures have been found for many of the diseases that used to kill us - and Australia is working to set up more treatment centres in remoter areas. They’ll need staff to work in the centres and that’s where ACPSEM comes in.”

Dr Round joined ACPSEM’s executive in 2004 just before the College started to experience substantial growth. He served as vice-president, president and past president until 2009. He continues to sit on some of the College committees and carries out research for the organisation.

Every three years he tracks down every clinical medical physicist position in Australia and New Zealand to find out how many there are and what they’re doing. This is then used to work out how many each country needs going into the future.

“What we’ve achieved is exciting and rewarding – we know what we do matters to a lot of people. The International Atomic Energy Agency has adopted our programme, and most recently I’ve been working in the Asia Oceania region.”

He’s taken on the role of chairperson of the Professional Development Committee of the Asia Oceania Federation of Organisations for Medical Physics.

“We’re working with countries as diverse as Iran and Japan, and that brings with it all sorts of different cultural issues. We have to develop programmes that ensure safe and appropriate operations that cover staffing levels, continuing professional development, and certification and licensing of medical physicists. It’s not a field where you can make mistakes. Safe and correct practice is highly important for the sake of patient safety.”